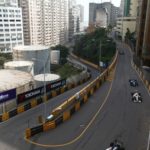 The Prema Powerteam-run Swede stayed at the top of the times for most of the session, initially with Antonio Giovinazzi – his closest rival for the 2015 Formula 3 European Championship – hard on his heels in second.

Giovinazzi’s Carlin team fitted him with two new tyres midway through the session, but a braking issue meant he could not improve and he returned to the pits with a couple of minutes to go.

Just after Giovinazzi stopped, Rosenqvist lopped two tenths off his provisional pole and then set a blistering time on his final lap to put himself on top by 0.822 seconds.

But it wasn’t Giovinazzi in second place, because Carlin teammate Callum Ilott bounced back in style from his free practice crash to join Rosenqvist on the overnight front row.

Like Rosenqvist, Ilott stayed on the same set of tires he used in the morning, and the Red Bull Junior didn’t even visit the pits, staying out throughout to clock up 18 laps.

Ilott’s fellow Brit Sam MacLeod fitted four new tires at his pit stop and on the last lap moved his Team West-Tec car into fourth place from fellow final-lap improver Daniel Juncadella, who finally got some good running after his Fortec Motorsport car suffered gearbox problems in the morning.

Markus Pommer was in the frame for much of the session, the Motopark driver ending up sixth – like Juncadella, he took two new tires at his pit stop.

Two GT works drivers and F3 junkies were in the top 10, with Yuhi Sekiguchi and Alexander Sims taking seventh and 10th for B-Max and Double R, respectively. Sandwiched between them were Mikkel Jensen, who was second early on in his Mucke Motorsport car but failed to improve after brushing a barrier, and Carlin’s Gustavo Menezes.

Jake Dennis managed his first serious Macau mileage after crashing in free practice and ended the day in 16th place, even though he lost further time when his air restrictor fell off and then suffered gearbox problems.

There were no red flags, with the only stranded car that of Sergio Sette Camara, who hit the barriers and stopped on San Francisco Hill rather than risk further damage by driving back to the pits.