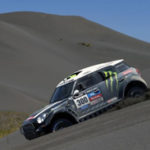 Stephane Peterhansel moved into the lead of the Dakar Rally on Friday, despite the X-raid team calling off the fight for victory on the previous day.

The Frenchman trailed team-mate Nani Roma by over five minutes going into Friday’s 12th stage from El Salvador to La Serena, and the team had decided it did not want to take any risks.

“The game is over,” said Peterhansel on Thursday. “We’ve had a good laugh and enjoyed ourselves. Yesterday evening, the team asked us to not take any more risks.”

However, Peterhansel won Friday’s stage and overtook Roma at the top of the standings.

He now leads the Spaniard by 26 seconds ahead of Saturday’s final stage.

Peterhansel’s was his fourth stage victory of the rally. He finished over three minutes ahead of Nasser At-Attiyah and almost six ahead of Roma, who was third.

Toyota’s Giniel de Villers was again the first non-Mini driver at the finish line, coming home in fourth ahead of Krzysztof Holowczyc, who completed the top five despite suffering a puncture.

Saturday’s deciding stage from La Serena to Valparaiso is only 157km.