Andretti United set the pace on the first day of Extreme E’s Energy X Prix in Uruguay, the team of Timmy Hansen and Catie Munnings topping the times after two practice sessions on the series’ first-ever grassland course.

The duo’s combined four-lap time of 10m2.248s in the second session of the day was 1.603s quicker than X44’s Sebastien Loeb and Cristina Gutierrez, who had gone fastest in the opening session – an unrepresentative session as teams experimented and paused between runs to debrief and alter setups.

Acciona Sainz’s Carlos Sainz and Laia Sainz were third-quickest ahead of McLaren’s Tanner Foust and Emma Gilmour who broke into the top five in the afternoon, giving the team a much-needed rebound after Gilmour suffered a slow roll earlier in the day.

McLaren was 3.381s quicker than Chip Ganassi Racing’s Sara Price and RJ Anderson – who is making his debut in-place of Kyle LeDuc this weekend – which rounded out the top five.

Abt Cupra’s Nasser Al-Attiyah and Klara Andersson were sixth, ahead of the newly-paired Fraser McConnell and Hedda Hosas for JBXE, while reigning champion team and current points leaders Rosberg X Racing were a low-key fourth after a conservative start to what is a crucial weekend for the team. However, they were dropped to eighth in the final classification after getting a 10 second penalty for clipping a waypoint marker.

Veloce’s new driver pairing of Kevin Hansen and Molly Taylor finished ninth after a penalty for speeding in the switch zone, with XITE Energy Racing’s Ezequiel Companc and Tamara Molinaro rounding out the field with the only time over 11 minutes after dropping three waypoint flags across their FP2 run.

The Hansen brothers had fastest sector times for much of the session, Timmy quicker in the first two sectors, Kevin the latter two – a lock-out that lasted until Abt Cupra went on track second-to-last and Al-Attiyah went quickest in the opening split. 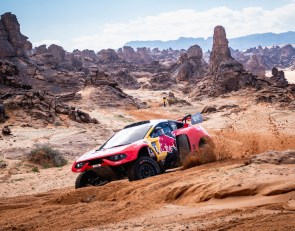