AlphaTauri had eyes on Herta before de Vries deal - Tost

AlphaTauri had eyes on Herta before de Vries deal - Tost

AlphaTauri team principal Franz Tost admits Nyck de Vries was not being lined up for a 2023 seat until the FIA decided not to give Colton Herta a Super License.

Herta was being courted by Red Bull as a replacement for Pierre Gasly if it let the Frenchman join Alpine, and Helmut Marko confirmed deals were agreed as long as the Californian received a Super License from the FIA. However, having failed to score enough points in IndyCar over the past four seasons based on the current regulations, Herta was ruled out, leading to de Vries getting his chance.

“Of course there were some talks with Herta but, as he doesn’t have a Super License, when the FIA said that they would not provide him with a Super License it was clear he was no longer an option for Scuderia AlphaTauri,” Tost said.

Tost insists Red Bull did look to its junior options before decided to move for another driver from outside its existing set-up.

“All the Red Bull young drivers were taken into consideration. There’s Liam Lawson, there’s [Ayumu] Iwasa, there’s [Dennis] Hauger in Formula 2, then [Isack] Hadjar in Formula 3, but they all still miss experience. They need to do another year or two in their categories and then we’ll see what the future will bring.”

While de Vries has been signed following a career that includes Formula 2 and Formula E titles in the past three years, Tost admits it was his impressive outing at Monza for Williams that paid a major part in the decision to hire him.

“This had a great influence because it showed his potential. He drove a fantastic race, did not make any mistakes, therefore it was an easy decision to take him.” 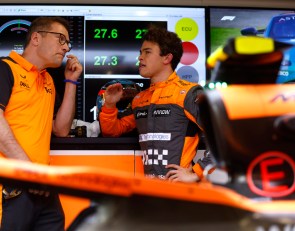 De Vries has seat fitting at McLaren after Norris illness