Acciona Sainz set the pace on the opening day of the Copper X Prix in Antofagasta, Chile, with the team of Carlos Sainz and Laia Sanz topping both practice sessions.

In the morning session, the team’s four-lap combined time — four laps instead of the usual two owing to the shorter length of the course for this event — was 9m32.925, a mere 0.179s ahead of championship leaders Rosberg X Racing. The advantage could have been bigger, however, were it not for a 10s penalty for the table toppers after they hit a flag at Waypoint 15.

The recently rechristened X44 Vida Carbon Racing team of Sebastien Loeb and Cristina Gutierrez were third, but over nine seconds adrift of the the pacesetters, with McLaren’s Tanner Foust and Emma Gilmour — albeit penalized by 10s for hitting a flag at Waypoint 16 — and Abt Cupra duo Nasser Al-Attiyah and Jutta Kleinschmidt rounding out the top five.

Chip Ganassi Racing’s Kyle Leduc and Sara Price wound up eighth, themselves also being penalized, this time for clipping the flag at Waypoint 9.

Veloce Racing’s Lance Woolridge and Christine Giampaoli Zonca were ninth and the final finishers, with XITE Energy Racing not completing the session. Timo Scheider carried too much speed into the first corner on his second lap, and ultimately broke a steering arm after hitting a bank.

In the afternoon the gap at the top was much larger, with Acciona Sainz’s advantage over Andretti United at 5.738s.

McLaren only completed three of the required four laps in second practice, after Gilmour sustained a puncture on her first lap. The team opted to switch drivers when she pitted, sacrificing the New Zealander’s second tour in the process.

It wasn’t the only team to not complete second practice. Abt Cupra’s Kleinschmidt set a rapid pace in the first sector on her opening lap, but a heavy landing from a jump towards the end of that initial tour left the team’s car damaged and the Dakar veteran holding her back.

A raft of penalties were handed out in the afternoon session too, with positions third through eighth all affected. X44 got hit with a 30-second penalty for speeding in the switch zone, while RXR and Ganassi were slapped with time penalties (15.1s and 40s respectively) for switch zone infringements.

Extreme E qualifying from Chile airs on FS2 Sunday morning at 12:30am ET, with the finals airing at 6pm ET Sunday on FS1. 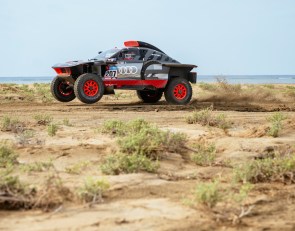