Nikita Johnson this afternoon sped to his second victory of the year for VRD Racing as the inaugural USF Juniors Presented by Cooper Tires season reaches toward its conclusion at Circuit of The Americas. Johnson, 14,  took the lead on the opening lap and was never seriously threatened during the 15-lap race around the 3.41-mile home of the United States Formula 1 Grand Prix.

Championship leader Mac Clark, on the other hand, had a rather more exciting time on his way to finishing second for DEForce Racing. Clark, 18, started dead last in the 19-car field after suffering a fuel pump failure in qualifying, but lost no time in working his way through the field. Third place fell to Bryson Morris, making his USF Juniors debut for Crosslink Kiwi Motorsport, following a protracted battle with Sam Corry (VRD Racing) and   Ryan Shehan aboard a second Crosslink Kiwi Ligier.

Clark, in fact, posted the fastest lap during qualifying this morning, but when his car ground to a halt on the racetrack, the session needed to be red-flagged – and the automatic penalty for causing a red flag requires the deletion of that drivers’ best lap. Even more unfortunately for Clark, that was the only flying lap he completed.

Corry, who began the final weekend of the season just 30 points adrift of Clark, looked set to take advantage of the title favorite’s misfortune by snaring his third Cooper Tires Pole Award of the season. The 14-year-old  duly led away from the start, only to make a mistake at Turn 12 on the first lap which dropped him to the tail of the field.

A couple of early caution periods and some fraught action among the pack enabled both Clark and Corry to work their way back into contention.

Clark, who made up eight positions on the opening lap, slipped past Shehan for second place at Turn 11 on the sixth lap, and for a while it looked as though he might be able to challenge Johnson for the lead. But the young Floridian had other plans. A succession of three fastest laps of the race enabled Johnson to build a cushion of more than a second over Clark, which he extended to 2.409s at the finish line.

“The start was good and I just stayed in second,” related Johnson. “I was pressuring Sam throughout the whole lap and, unfortunately, he went into Turn 12 and spun it. I am not sure what happened, but I took over the lead after that. I checked out with both the yellow flags and then I saw Mac in my mirrors and I knew I just had to do fast, consistent laps and that’s what I did and I brought it home. It was a great race and I want to thank the whole VRD crew.”

Shehan couldn’t match Clark’s pace and was gradually reeled in by both Morris, who survived a quick spin on the third lap, and a recovering Corry, who ensured a thrilling three-car battle for the final podium position over the course of the closing laps. Morris moved into third with two laps remaining, and held off a valiant effort from Corry by a scant 0.040 of a second as they sped past the checkered flag.

The USF Juniors championship will conclude tomorrow with another pair of 15-lap races to wrap up the inaugural season. Clark’s magnificent recovery this afternoon allows him to carry an extended 35-point margin over Corry into the final two races, which will see the green flags at 9:25am and 1:20pm CDT. 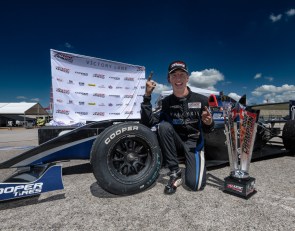 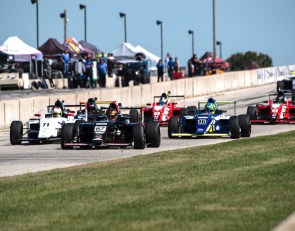 Inaugural USF Juniors Championship to be decided at COTA finale 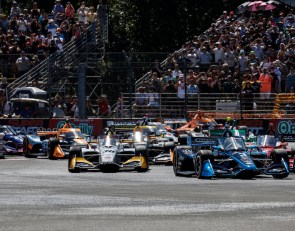