In last season’s championship-decider, Max Verstappen snatched the title from Lewis Hamilton when the then-FIA race director Michael Masi only applied parts of certain regulations in order to ensure that the race finished under green flag conditions. A subsequent investigation found that the rules had not been applied correctly – a ruling that ultimately cost Masi his job – but it remained a contentious issue because the result was allowed to stand. After seeing a race finish under safety car in Monza last weekend, Wolff said he’s glad the FIA appears to have learned from the incident.

Hamilton admitted last Sunday’s finish reminded him of Abu Dhabi, telling Sky Sports: “It always brings memories back — that is the rule that it should be, right? So only one time, in the history of the sport that they haven’t done the rule.”

Despite his frustration, Wolff stressed he does not want to see races finishing behind a safety car, stating he is in favor of the FIA and the teams trying to find a better solution in future to try and avoid anticlimactic endings.

“I think we should all sit down and say, ‘Is there something we could do better?’ But what happened (in Monza) is in the regulations book and that is why it was applied. Would I have wanted to have a last lap with a pile of cars on top of each other in the chicane? Hell yes. It’s good TV.

“I think we need to say, ‘Do we want to have a race finishing under green?’ And then reverse-engineer it from there. So you can say, ‘Five or 10 laps to the end, if we have a safety car, let’s red flag it and make sure that we are racing at the end.’ If that’s in the regs, good but I think there’s much more clever people than sporting directors that would have some ideas.”

The safety car finish was not the only point of debate after Monza, due to the confusion surrounding the grid order on Saturday evening, something Wolff believes can be addressed even more quickly.

“I think we know why we have the engine penalties, because we don’t want to have qualifying engines and deploy an engine every single race weekend. There was suggestions, ‘Well, maybe the teams have penalty points in the championship,’ but that wouldn’t solve the problem as we would still throw engines at the driver that can win the championship.

“I think we need to tidy (penalties) up. Maybe we can do it unanimously for next year — it would make sense. All of us together, sticking our heads together and say how can we clean that up in not wanting confusion.” 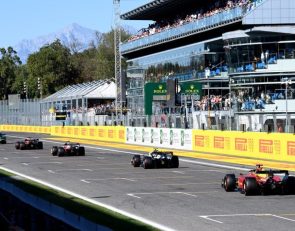