Blaney in the Cup playoffs after miraculous drive at Daytona

Blaney in the Cup playoffs after miraculous drive at Daytona

Ryan Blaney is going home from Daytona International Speedway to crack open a beer and decompress after miraculously claiming the final spot in the NASCAR Cup Series playoffs.

Driving a car damaged on seemingly every corner and being held together with tape and hope, Blaney finished 15th in the Coke Zero Sugar 400. It was enough to stay ahead of Martin Truex Jr. on points (by a slim margin of three) as Austin Dillon won his way into the postseason.

“That was a stressful day,” Blaney said. “A long weekend, honestly, of no qualifying, not getting in the car, [didn’t] race last night, wait around a day, get wrecked, and then you have a three-hour rain delay. Just definitely mentally drained, so it’ll be nice to relax a little bit.”

Blaney was involved in the first caution of the day on lap 31 when the bottom lane got stacked up. He ended up shoving Denny Hamlin into Erik Jones, who was leading the inside line but seemingly losing momentum. The accordion effect sent Hamlin spinning and others piling in, with Blaney collected by Christopher Bell, who came across the racetrack.

“The right front tie rod was broke; toe link was broke; the hood’s flying off of it,” Blaney said. “We spent a lot of money on bear bond today. We went through our bear bond reserves. Yeah, suspension, body, you name it, it was pretty rough, but luckily, it was good enough.”

Trying to limp around after the crash, he was five laps down before the lap 100 mark. When the race was red flagged due to another storm, Blaney was in a precarious position not to make the playoffs because Dillon was the leader, and Truex had overtaken him on points with the help of the stages.

“It was fine,” Blaney said of waiting around to see if the race would restart. “Sat up on the box for about an hour or so and went back to the bus and changed out of my wet clothes and had some dinner and watched the PGA Tour. There’s nothing you can do. I’ve got in my head that there’s no use sitting there pulling your hair out over it. It’s not in your control. You can only go out there and hope it goes back racing.

“I fully accepted the fact it could downpour at any moment and we’d be out. You just have to accept those things and know you have no control over it. No point stressing yourself out over that; you’ve got to try to relax and hope for the best.”

Blaney finished multiple laps down and Truex finished eighth. In the final few laps, it appeared Blaney was going to be the one to miss the playoffs as Truex ran inside the top five, but when Truex couldn’t hold on to the draft and began losing positions and points, it saved the No. 12’s season.

Blaney climbed out of his mangled machine and gave a “great job” to his No. 12 team.

“Shook all those guys’ hands and told them good job and way to stick with it,” he said. “They did a hell of a job fixing that thing. It was destroyed. I got done wrecking, and the wheel was 180 degrees turned around and not driving. The right front was stopped.

“They did a great job fixing it and making it to where it was halfway decent enough to keep running and make minimum speed. So I thanked all those guys for sticking with it. They were as big a part of this as I was at keeping their head in the game.” 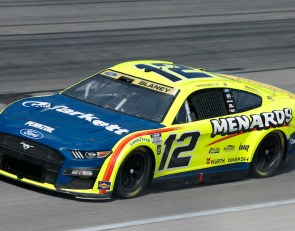