This Saturday, August 20, the VP Racing Fuels Oval Challenge of St. Louis at World Wide Technology Raceway in Madison, Ill., just across the Mississippi River from St. Louis, Mo., will comprise the second and final oval race of the 18-race season with rookie standout Louis Foster seeking to stretch his already commanding lead at the head of the point standings.

Foster, 19, has taken the series by storm. The Briton has earned at least one podium finish at each of the tracks he has visited so far with the Exclusive Autosport team, including a dominant performance at the Lucas Oil Indianapolis Raceway Park oval in May and a sweep of both races at the Toronto street course last month. Foster’s tally of six wins has taken him 71 points clear of his closest challenger, Reece Gold ,whose Juncos Hollinger Racing teammate Enaam Ahmed lies a further 20 points adrift in third.

Gold, who will not turn 18 until the eve of the championship finale, has won twice this season, while Ahmed, a former British Formula 3 champion who has finished four times on the podium this year, is still searching for that elusive first victory.

A 50 percent points bonus for the two oval races will result in 45 points being awarded to this weekend’s winner — up from the usual quota of 30 to which the series will revert for its final tripleheader event, also in support of the NTT IndyCar Series, at Portland International Raceway on September 2-3. The usual single points for pole position, fastest race lap and leading most laps also will be up for grabs at each of the final four races.

Nolan Siegel stands only four points behind Ahmed with two wins to his credit for DEForce Racing. Teammate Kiko Porto, Josh Green (Turn 3 Motorsport) and Jay Howard Driver Development drivers Braden Eves — who won at WWTR last year, and Salvador De Alba also have tasted the spoils of victory during an especially competitive season for the middle rung on the Road to Indy ladder.

In addition to all of the regular contenders, three new rookies will make their debuts this weekend. Trey Burke will join Turn 3 Motorsport as a stand-in for Jonathan Browne, who has college final exams to complete in his native Ireland, while Bijoy Garg also will make the step up from the Cooper Tires USF2000 Championship for the first time with DEForce Racing. Marcos Flack, 16, a race winner this year in the GB3 Championship in Europe, will make his North American debut with Jay Howard Driver Development.

A pair of test sessions on Friday will provide the drivers with a valuable opportunity to gain some additional experience on the 1.25-mile oval prior to a busy Saturday which will begin with 30 minutes of practice at 9:45am. Single-car qualifying will take place at 11:45am to determine starting positions for the 55-lap green feature which will see the green flag at 2:15pm. All times are Central. 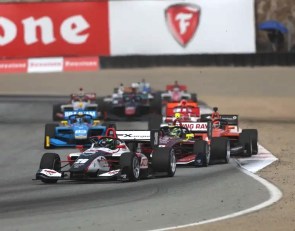