Louis Foster has taken another step forward in his quest for the Indy Pro 2000 Championship Presented by Cooper Tires title with a flag-to-flag win by a 5.2-second margin in this afternoon’s L&W Supply Grand Prix of Toronto for his Canadian-owned Exclusive Autosport team.

This is the fifth win of the year for the driver who hails from Basingstoke, England, and has now become the first driver this season to win on each type of circuit — road, oval and street — on the 2022 schedule.

Enaam Ahmed, who is chasing his first win of the season for Juncos Hollinger Racing, finished second with Josh Green of Turn 3 Motorsport, who rebounded impressively from a heavy crash in the morning qualifying session, third.

Foster continued his rich vein of form during qualifying on Friday afternoon when he posted the fastest time to clinch another Cooper Tires Pole Award, his third of the season. He held off Ahmed’s challenges at the start but that was short-lived when caution flags flew midway through the opening lap for a wing on the front straight from the No. 2 entry of Jonathan Browne of Exclusive Autosport.

The resulting single file restart was no problem for Foster as he continued to extend his gap while second through fifth battled nose to tail. Reece Gold (Juncos Hollinger Racing), Nolan Siegel (DEForce Racing) and Green were in the thick of the battle as Green managed to displace Siegel for fourth.

A second, brief caution on lap 10 for Salvador De Alba (DEForce Racing), who found the tires in Turn Three, wiped clean the 4.9-second lead Foster had developed and the ensuing result gave Green the opportunity he needed to bump Gold from a podium finish.

“Our pace on cold tires was better than everyone else’s so we were able to pull out a good lead early. The safety car bunched us up, but the car was great and we were able to stay out front,” said Foster. “The team worked hard, as they always do, and I’m proud to bring them a win in their home country!
“It’s been a good stretch, these past five races. I think it just comes down to getting a feel for the tires and how to maximize them in qualifying — we’ve had strong race pace all year, but we didn’t get the results because of where we qualified. Once we’ve been in the lead, we’ve been able to drive away. But before this year, I’d never driven on an oval or on a street course. St. Pete was such a new experience but this weekend, I had so much more confidence coming in. You can’t make a mistake, it’s so unforgiving. The championship is obviously in my mind – we just have to make correct decisions in the races and be smart. But we’re starting on pole again tomorrow so we’ll be aiming for another win.”

With his victory today, Foster earns another PFC Award for team owner Michael Duncalfe and extra points for fastest race lap and most laps led bringing his tally to a 63-point lead over Gold in the standings.

Tomorrow’s L&W Supply Grand Prix of Toronto Race Two will see Foster again lead the field to the green flag following qualifying this morning with Siegel, Green, Gold and Jordan Missig (Pabst Racing) rounding out the top five. The action will get underway at 11:40am ET. 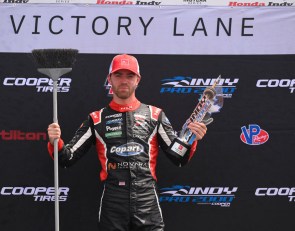