The couple were already successful entrepreneurs – Kathy as an interior designer and Jim as the co-founder of Coastal Pet Products, Inc. in Alliance, Ohio, one of the largest makers of pet restraints and supplies in the country. Then, as fate would have it a decade ago, they became owners of Pittsburgh International Race Complex, widely known as Pitt Race. How they got there is a combination of good timing and arguably better instincts.

Jim, a long-time amateur racer got Kathy hooked soon after they married and the pair scratched their racing itch mostly through Viper Racing League competitions. One of the tracks they raced at was then known as BeaveRun Motorsports Complex in Wampum, Penn., 45 miles northwest of Pittsburgh. In 2002, the Stouts took on a minor investment role in the facility that was then comprised of a 1.6-mile road circuit and some dilapidated mobile trailer units used for offices and other facilities. The land and the location were stunning, but the track was heading toward bankruptcy.

“Initially, our interest was mostly in the land,” recalls Kathy, recognizing a way to parlay their investment into something more.

By 2010, Chapter 7 bankruptcy proceedings were beginning, and In 2011 the Stouts negotiated a purchase. Now theirs, they began to see beyond the land value and toward an opportunity to realize the track’s full potential. The area needed a good club track, one that amateur racers on both two and four wheels would relish coming to.

They renamed the facility Pittsburgh International Race Complex, drawing a connection to nearby Pittsburgh, which was undergoing a renaissance as a tech hub likely to bring a new crowd of amateur racers.

A scenic setting with naturally-rolling terrain provides the location for Pitt Race’s multiple track configurations, which cater to amateur racers as well as performance driving events.

“We’ve focused on the things that matter to racers, starting with a track that’s fun to drive,” says Jim. “We added the 1.2-mile South Track, and then paved and updated the original 1.6-mile circuit known as ‘The North Track.’ Both can be run independently, or combined to make a 19-turn, 2.78-mile full course.

“From our business background, we know that details make the difference to the experience,” Jim continues. “There’s a 16in. deep concrete base beneath the track paving, which avoids it heaving and settling from the winter months. Once the paving was down, we drove it extensively to make sure we installed the apex curbing just where it needs to be.”

Among the myriad enhancements made to Pitt Race, particularly close attention was paid to the track, including a concrete base below the asphalt surface and apex curbing placed only after extensive lapping to determine the ideal positioning.

Next, they moved on to facility amenities.

“What’s important to racers is a great track and clean restrooms,” says Kathy, laughing at her own truism. “Club racers come for a fun experience, and they often bring spouses or friends with them who aren’t racers. If those friends aren’t having a good time and enjoying the facility, then they aren’t coming back.”

True to their word, Pitt Race is a very tidy facility. From the restrooms and showers to the paddock area, they take extra pride in ensuring that everyone who enters the property feels welcome and comfortable.

With all the improvements, the Stouts’ vision of bringing a new audience to Pitt Race has more than proven true. Track days are booked months in advance, while group programs are growing each year, exposing more non-racing people to the thrills of performance driving.

Built for thrills on two wheels as well as four, Pitt Race enjoys widespread kudos from among those who visit.

Will Pitt Race ever open its doors to a high-level spectator event?

“Never say never,” they both chime in. But for now, Pitt Race is enjoying its burgeoning status as the best race track for amateur racers in the region, and increasingly beyond.

Get on track at Pitt Race

The facility also boasts a seven-acre skid-pad, pro shop, 16 rental garages, food concessions and a conference center, plus a separate karting facility with a fleet of four-stroke rental karts.

A separate, 0.8-mile karting circuit ensures that serious karters and novices have their own venue to enjoy.

As well as hosting racing events for several sanctioning bodies, Pitt Race also offers a number of ways to get on track through its HPDE, drifting and autocross programs. 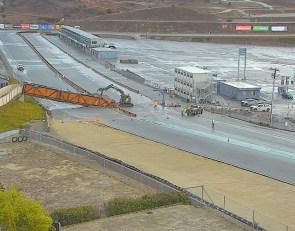