There’s a fantastic two-team battle developing for the Daytona Prototype International (DPi) title in the 2022 IMSA WeatherTech SportsCar Championship, but the competitor that has consistently proved fastest on the track this year isn’t one of them.

The No. 60 Meyer Shank Racing with Curb-Agajanian Acura driven by Tom Blomqvist and Oliver Jarvis leads fellow Acura runners Ricky Taylor and Filipe Albuquerque (No. 10 Wayne Taylor Racing) by a single point. Meanwhile, a feast-or-famine campaign has relegated the No. 01 Cadillac shared by Sebastien Bourdais and Renger van der Zande to fourth in the title chase, 143 points out of the lead, with the No. 02 Cadillac Racing tandem of Earl Bamber and Alex Lynn (-96) in between.

The first six races of the 10-race slate often proved challenging for the No. 01 and 02 Cadillacs prepared by Chip Ganassi Racing as the team fields two cars in IMSA’s top class for the first time since 2016. Mechanical problems relegated the 01 to last in class at the season-opening Rolex 24 at Daytona and the Mobil 1 12 Hours of Sebring, a race won by the No. 02 Cadillac.

Bourdais claimed a second consecutive pole at Long Beach, then had the speed to drive through the field to win after a rare mistake dropped him to the back. The 01 was a non-factor at WeatherTech Raceway Laguna Seca, before another Bourdais pole at Mid-Ohio was nullified by a clash between van der Zande’s Cadillac and Taylor’s Acura in the Esses from which the 01 came out second best.

The pole-to-flag victory at Detroit was therefore the best possible tonic for a team searching for consistency and reliability to match its undeniable pace. Most importantly, it cut 65 points from their championship deficit, moving them from sixth to fourth in the standings.

“We’ve been really fast and had a bunch of poles, but unfortunately that doesn’t award the amount of points you need to win the championship,” Bourdais noted after his latest P1 qualifying effort at Detroit. “We need to kick-start our challenge in the second half of the season and put some serious points on the board. We really need for things to start going our way and our opponents to run into some issues if we want to get back in that fight. We need to keep our heads down, keep pushing, and minimize mistakes, and then hope we get some luck at some point.”

Bourdais and van der Zande weren’t especially happy with IMSA heading into Detroit, as the sanctioning body essentially levied the Cadillacs with a 25-kilogram Balance of Performance penalty at a track where they have frequently been successful in the past.

IMSA has been extremely proactive with BoP adjustments in 2022 in both the DPi and GTD PRO categories, as it attempts to maintain parity between the Cadillac and Acura prototypes, while also integrating new generation GT models from Corvette and BMW. For this weekend’s Sahlen’s Six Hours at the Glen at Watkins Glen International, Cadillac pretty much gets its 25 kilos back, losing the 15 kg it gained at Detroit while the Acuras gain 10 kg.

The frequent BoP changes may seem a bit heavy-handed, but surprisingly, most of the competitors are not calling foul.

The DPi class is in its sixth and final season of competition, and IMSA scrutineers have gathered a solid database that demonstrates where the Acura is stronger than the Cadillac, and vice versa. In general terms, the Cadillac, with a heavier V8 engine and taller center of gravity, tends to shine on tighter, bumpier circuits, whereas the Acura is at its best on faster, smoother tracks.

That was most evident earlier this year at Long Beach, where Bourdais smashed the lap record in qualifying, then was able to drive through the field after dropping to the back after a rare mistake.

Acura dominated the trackside signage at Long Beach, but the tight and bumpy layout played right into the hands of the Cadillacs. The series is leaning towards track-specific BoP to try to minimize the likelihood of manufacturers having a clear advantage at certain circuits. Phillip Abbott/Motorsport Images

“There’s been a few adjustments lately, and a few drivers have had a lot to say about it,” said championship co-leader Jarvis. “I think this year they have gone to a more track-dependent sort of BoP, which I’m all for. I don’t believe it’s good for the championship or the races to have such a difference at cars as we see at, say, Long Beach and Detroit.”

“I’m a fan of going to more track-specific BoP,” added Taylor. “It’s harder to nail, but I think after five years of the current configuration with the same cars, IMSA has been kind of able to nail it down and they’ve been able to make some well-targeted adjustments here and there to try and close the gaps at some more dominant tracks for Cadillac or Acura.”

With six races down and four to go, the DPi championship should logically be fought out between the No. 10 and No. 60 Acuras. But the sheer pace the No. 01 Cadillac has demonstrated so often this year shows that Bourdais and van der Zande cannot be counted out.

Taylor, in particular, knows how strong the No. 01 Cadillac duo could be coming down the stretch. While he has never directly teamed with van der Zande, his brother, Jordan, shared a DPi protoype with the Dutchman when van der Zande drove for Wayne Taylor Racing from 2018-20. And Bourdais has proven to have lost none of his speed or savvy at age 43.

“We can’t just look at the No. 60,” Taylor noted. “We have to make sure we’re winning races or finishing on the podium, and most importantly, we can’t let a Cadillac into the equation. The No. 01 has been fast everywhere and if they start putting together results, they could very easily find themselves back in the fight.

“I think we have to do our best to do our own thing and win races and finish in the top two or three at worst, and that will negate whatever they’re doing.” 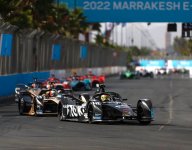