NTT IndyCar Series championship leader Josef Newgarden has kept his calendar exceptionally clear throughout his open-wheel career, but that’s going to change in July when he steps outside his comfort zone in a one-off appearance in the SRX series.

Set for July 9 on the short paved oval at the Nashville Fairgrounds in his home state of Tennessee, Newgarden will take part in the SRX race between IndyCar visits to Mid-Ohio the week prior and a trip north to Toronto the following weekend. Team Penske’s two-time IndyCar champions has tried to take part in IMSA’s Rolex 24 At Daytona and other endurance races, all with no luck, but thanks to an invite from SRX founder Ray Evernham, Newgarden will finally get to try something completely different from his No. 2 Chevy Indy car.

“I did tell Ray last year when I went to the Nashville SRX race that I’d love to run one of these races, and so they’ve made it possible for me at my home event,” Newgarden told RACER. “I’ve not had many opportunities to try other stuff. I don’t even know that I’ll be able to drive this car before that weekend. So I probably won’t be very well prepared, but I’m happy to do it!”

Newgarden will be pitted against other stars of motor racing on the half-mile paved oval in the converted Trans Am cars powered by big, naturally-aspirated V8 engines.

“I’ve never really driven a stock car either and this is kind of a pseudo stock car, more like a road race car turned into a stock car,” he said. “I don’t know if I like short ovals in a Trans Am-type car, but I’m gonna find out.”

Newgarden hopes the Nashville SRX outing becomes the first of many extracurricular outings in the sport.

“I’ve wanted to do other things outside IndyCar and just haven’t had the opportunity,” he said. “And maybe this is the first of multiple things that might come in the future. I would hope so. I really want to branch out and get some extra experience.” 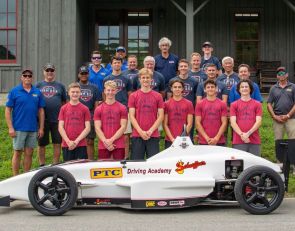