For the second event in a row, 2020 champion Mike Skeen topped the practice charts in his No. 89 3Dimensional Services Group Ford Mustang with a best time of 1m28.702s at Laguna Seca.

Skeen was followed by teammate and 2021 champion Rafa Matos in the No. 88 3Dimensional Services Group Ford Mustang with a lap time of 1m29.210s. Connor Mosack was next in his No. 28 High Point University Chevrolet Camaro with a 1m29.248s. Thomas Merrill’s No. 26 BridgeHaul HP Tuners/Cope Race Cars Ford Mustang was fourth with a 1m29.343s, and Brent Crews rounded out the top five with a 1m29.572s in his No. 70 Nitro Motorsports Ford Mustang.

In qualifying for the TA2 event, Skeen remained at the top of the board, setting the new track record for qualifying with a blazing fast lap time of 1m27.569s and earning his first Motul Pole Award of 2022.

“This weekend has been great so far,” said Skeen. “We unloaded really fast and haven’t really had to do a ton of work on the car, so that’s been really positive. The qualifying session was very smooth. I didn’t hit traffic. It’s nice having the split groups and to be able to give everyone a chance to get a representative lap time. The car was good right off the bat, the tires came up at just the right time. It was kind of a magic lap, putting everything together well, and I’m really happy about that. Hopefully it parlays into some good pace in race trim tomorrow and we can get a good finish for 3Dimensional Services Group.” 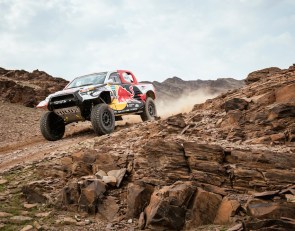