McDowell back on top in third Daytona 500 practice

McDowell back on top in third Daytona 500 practice

NASCAR Cup Series teams are one day closer to the Daytona 500 after another calm practice session on Friday evening.

Ware had a close call 17 minutes into practice. Coming off Turn 4 in a Ford drafting pack, Ware’s car shot to the left after a small tap from behind and he had to go down pit road and gather himself up.

“That got my blood pumping,” radioed Ware.

The four Hendrick Motorsports drivers of William Byron, Kyle Larson, Chase Elliott, and Alex Bowman started the session by drafting together. As did the four Stewart-Haas Racing teammates of Briscoe, Almirola, Cole Custer  and Kevin Harvick.

As was seen back in the days of tandem drafting, drivers practiced swapping positions. Dillon spent time pushing teammate Reddick, and eventually the two swapped spots to give Dillon’s nose clean air. Suarez and Ross Chastain of Trackhouse Racing also did the same as they ran together on track. Or, in the case of Stenhouse, he told his spotter to relay the message to others that he did not want to be pushed.

Joey Logano, driving his backup car after crashing on the last lap of the second Duel race on Thursday night, was one of the first drivers on track for practice. Logano made single-car runs early in the session and was 33rd on the speed chart.

Thirty-four of the 40 drivers competing in the Daytona 500 clocked a lap on the track in the third practice session. 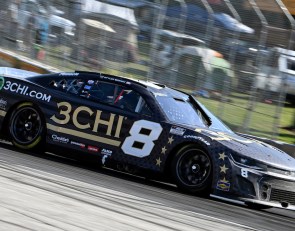