IMSA commentator Calvin Fish saw his favorite expression come to life last weekend  as ‘argy’ met ‘bargy’ in a WeatherTech SportsCar Championship event where contact ruled the day. Depending on which side of the conflicts you were on, it made for an entertaining race where aggression and anger flared up on multiple occasions.

The fun took off more than an hour into the 2h40m contest when Kevin Estre’s No. 79 Porsche hit the No. 3 Corvette with Antonio Garcia onboard and took the lead. Then, with the No. 3 shuffled to last in the three-car GT Le Mans class, the No. 4 Corvette with Nick Tandy at the controls settled the score and drove Estre into the weeds.

The payback was a wee bit excessive, but hey, if you’re going to send a message, make sure it’s received with clarity. Thankfully, IMSA race director Beaux Barfield watched and refrained from doling out penalties. Next, Estre took himself out as he flew off the track on his own and stuffed the WeatherTech Racing 911 RSR into the Virginia International Raceway barriers, and a sense of calm was restored in GTLM.

Later, in GT Daytona, fourth-place Jack Hawksworth did the proverbial ‘send it’ down the inside of Pat Long’s third-place Porsche with the checkered flag on the horizon. Once the scraping and chafing was done, the No. 14 Lexus RC F GT3 was headed for the podium as Long fumed inside the No. 16 911 GT3 R.

A few laps earlier, in the same location, we had the most contentious collision of all at the wild Michelin GT Challenge event. The aforementioned Garcia — chasing his Corvette teammate while holding a tiny chance of getting to his rear bumper and vying for the overall win — said a prayer and threw his C8.R into Turn 1 with the hope of passing GTD leader Bill Auberlen in the Turner Motorsport BMW M6 GT3.

With less than 10 laps remaining and facing a sizable 2.1-second deficit to the sister Corvette, the goal to minimize the time loss while overtaking Auberlen went awry as Garcia half spun, clobbered the BMW and sent both cars pirouetting.

Once the Corvette pulled away from the scene of the GTD crime, the gap to first had grown to an untenable 12 seconds, the BMW had a flat tire and Auberlen limped his way to pit lane. The net result was Garcia going from second to second in GTLM, the Turner Motorsport team from first to 12th in GTD and, sadly, its title aspirations for Auberlen and co-driver Robby Foley also disappeared in that cloud of smoke.

Hawksworth found the podium at VIR, but might have needed to give Pat Long a wide berth in the paddock afterwards. Richard Dole/Motorsport Images

There weren’t the only incidents at VIR, but they certainly gave rise to some high-caliber opinions after the race. Let’s start with Turner Motorsport’s take on the situation in their post-race press release: “Auberlen was running in P1, clearly focused on his 65th IMSA victory — then it happened. Antonio Garcia racing in the GTLM class, where everyone gets a trophy because there are only three cars competing, made a unnecessary dive bomb move on Auberlen where the ‘Vette driver lost control and crashed into the side of the BMW.”

Offering a quote on the transgression, Will Turner made sure the Corvette driver understood his position while all but guaranteeing he will never be invited to a dinner hosted by the Spaniard.

“Super disappointed for the team. Garcia’s mistake ended our championship hopes,” he said. “The guy didn’t even come over to apologize. ‘Classless’ is the word that comes to mind”

In Corvette’s post-race missive, there was one thing missing from Garcia’s quotes – a mention of Auberlen, Turner, and the Turn 1 crash. IMSA’s Barfield also let this one play out without the series’ intervention.

Before Long was hip-checked and passed by Hawksworth, his teammate Trent Hindman was hit by a rival exiting pit lane, which shot the Wright Motorsports Porsche onto the grass and forced a stop to inspect the car. Despite the early adversity, Long was able to rally back, but the closing exchange with the Lexus did not sit well with the Porsche factory driver.

“Two key events cost us a top-two finish today,” Long said. “First, getting taken out by a lap-down car coming out of the pits early in the race. We fought back and made it up to a podium position and on the last lap, unfortunately, as a GTLM car was coming through, opened the door to the car behind us and we got run over and had to settle in a battle to even hold onto fourth place. I am proud of the team but frustrated with the result.”

Garcia made his presence felt in the GTD title battle – despite racing in GTLM. Jake Galstad/Motorsport Images

A bemused Estre, who ratcheted up the thrills for a brief mid-race spell, also had some gripes to air.

“We got lucky with the yellow which helped, and that put us up with the Corvettes,” he said. “I think we had more pace than them. I had some banging doors with Nick (Tandy) at the restart, which was unnecessary because I passed him already. I could also pass the No.3 car, and then Nick went hard again on my side. I went back to P2 and lost some time in traffic and then I pushed too hard trying to come back. I made a mistake in Oak Tree and hit the barrier. I was able to come back, but it was too late. It’s a shame.”

And that, in part, was the Michelin GT Challenge at VIR. IMSA hosts two GT-only WeatherTech Championship events each year, with visits to Virginia and Lime Rock in Connecticut as its standard bearers for production-based sports car racing.

There’s nothing wrong with the East Coast-centric locales, but it might be worth adding the Midwest and a West Coast stop to an expanded offering of IMSA’s GT Wars. The big, dramatic five-class WeatherTech Championship events are awesome, but if last weekend gave us another reminder of what we’ve known for years, it’s how nasty and exciting IMSA can be when its GT cars are placed in the middle of the spotlight. Brand-loyal fans, loving and hating on the cars and teams in attendance, and impassioned drivers, creating storylines that resonate with a loyal audience.

IMSA has developed something special here, and two GT-only dates are great. But how about three or four? 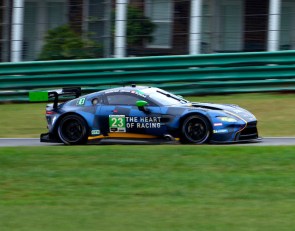