Christian Rasmussen came from behind to score a spectacular victory for the Jay Howard Driver Development team in this morning’s delayed Cooper Tires Freedom 90. The eighth round of this season’s Indy Pro 2000 Championship Presented by Cooper Tires saw Rasmussen battle past Juncos Racing’s pole winner Reece Gold with a dozen laps remaining. The Dane then held off a determined final charge from Gold to seal the victory by just over a half-second.

After earning his fourth consecutive Cooper Tires Pole Award during traditional single-car qualifying on Thursday, Gold duly led the field toward the green flag amid a gathering gloom on Friday evening. Unfortunately, a light precipitation began just as the race was due to start in earnest, leading to yellow flags being displayed as the race clock began ticking down. And after five laps behind the pace car and the drizzle intensifying, the race was halted and eventually postponed until this morning.

The weather remained cool but the skies were clearing as the contenders filed back out onto the oval for the remainder of the 90-lap race at a little after 11:00 am ET. Gold confidently retained his advantage at the start while behind him Rasmussen, who started third, soon managed to slip past Exclusive Autosport’s championship leader, Braden Eves on the back straightaway.

The gap between Gold and Rasmussen stretched to almost two seconds with 30 laps in the book, but the Dane was able to close in as the two leaders began to encounter some slower traffic.

The pair spent the majority of the contest separated by only a few car lengths as Gold clung tenaciously to his lead. There were a few close moments as Gold and Rasmussen put a lap on the third Juncos Racing Tatuus driven by rookie Kyffin Simpson running in ninth, but still Gold managed to hold on.

Next in their sights was Eves’ teammate Artem Petrov. Again the two leaders managed to work their way past, but on Lap 78, with the laps clicking by, Rasmussen managed to draw alongside Gold on the back straightaway. He carried that momentum aggressively into Turn 3 on the inside line to wrest away the advantage. This was wheel-to-wheel racing at its best.

Having made the pass for the lead, Rasmussen was looking good for his fourth win of the season, but Gold wasn’t done yet. The leader’s pace eased significantly over the final few laps and Gold tried to pounce with another lunge to the inside at Turn 3 on the 90th and final lap. But Rasmussen fought him off to claim the spoils — and the championship lead. Rasmussen also took home the Tilton Hard Charger Award and secured another PFC Award for Jay Howard as the winning team owner.

“What a race! This means a lot,” said Rasmussen. “I learned so much winning here in USF2000 last year and that patience is paying off now on the next level. Early on I just tried to hold the gap to Reece since it’s so hard to pass here — especially with Reece running as well as he was.

“We got a chance with the backmarkers and I was able to make the pass stick. It was a great run and it’s a great feeling, even more so since I have the championship lead again. The car was definitely a bit loose. It was hard to figure out the setup with all the rain, then coming back today. A bit tricky, but we pulled it off. We have to keep looking forward and winning as many races as we can for the championship.”

Gold was disappointed not to finally claim his maiden Indy Pro 2000 victory, especially after also finishing second to Rasmussen in USF2000 last year, although he did gain a small consolation by earning one more championship point as a result of taking The Ticket Clinic Fastest Lap Award.

Sulaiman spent the first half of the race locked in a battle for fourth place with Irishman James Roe (Turn 3 Motorsport). Eves, who had started on the outside of the front row, was clearly struggling, having fallen fully half a lap behind the leading duo. Finally, at two-thirds distance, Sulaiman made third place his own, and after Roe’s strong run ended in retirement, Eves instead had his work cut out to remain narrowly ahead of Hunter McElrea (Pabst Racing) and Jacob Abel (Abel Motorsports) at the checkered flag.

The Indy Pro 2000 Championship Presented by Cooper Tires moves on to Road America in Elkhart Lake, Wis., for a doubleheader event on June 18-20. 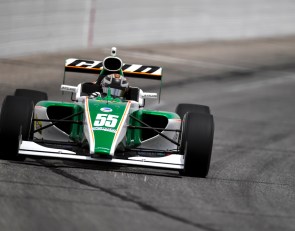 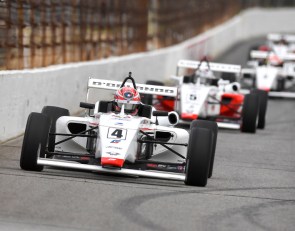 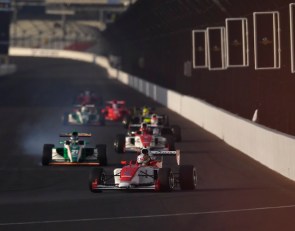