Team Penske led the opening day of practice for the 105th running of the Indianapolis 500 as 2018 race winner Will Power edged Andretti Autosport’s Ryan Hunter-Reay off of the top spot in the early stages of Happy Hour.

VeeKay 'was so good already before IndyCar' - Juncos

Power’s No. 12 Chevy recorded a lap of 226.470mph to secure P1 as Hunter-Reay delivered a 226.371mph run in the No. 28 Honda as running in the draft dominated the relatively cool two-hour stretch from 4-6 p.m. ET that took place under overcast skies.

“Just a big tow,” Power said. “It’s as simple as that – trying to catch that train. But as far as in traffic, I felt pretty good. Running with two or three cars in front, I felt as comfortable as I have in a while.”

Defending race winner Takuma Sato ended the session P4 with a lap of 226.132mph in the No. 30 Rahal Letterman Lanigan Racing Honda, and the big surprise of the day, Dreyer & Reinbold Racing’s Sage Karam, ran P4 in the No. 24 Chevy at 225.942mph.

“It was a pretty good day,” Hunter-Reay said. “These conditions are really nice, but the heat’s coming and it’s going to get tricky for everyone. It’s only practice, so we’ll put our heads together tonight and roll out ready for tomorrow.”

The checkered flag is out for the last practice session of the day. Here are the top 6 drivers:

Outside the top 10, two-time Indy 500 winner Juan Pablo Montoya returned to form with P12 in the No. 86 AMSP Chevy. The same could also be said for Paretta Autosport, which had a productive first day at the Indy 500 with Simona De Silvestro in the No. 16 Chevy.

The Swiss driver turned just 10 laps in the two-hour morning session as a technical issue send the car back to the garage. Fixed and ready in the afternoon, De Silvestro was the most active driver with 71 laps, which saw a best that left her holding P13 with a best of 224.230mph.

A similar trend was also found with Andretti Autosport where Hunter-Reay’s P2 lap was well clear of his Andretti stablemates, with the next-best in P16 with James Hinchcliffe in the No. 29 Honda (223.780mph). Marco Andretti ended P19 in the No. 98 Honda (223.336mph) and the remainder of the six-car squad P20 or lower.

UPDATE: The green flag is back out with just a little over an hour left in practice.

Top Gun Racing made its debut on Tuesday with RC Enerson in the No. 75 Chevy. The skilled Floridian and the underdog team was nothing short of impressive as they completed two of the three Rookie Orientation Program stages, but a mechanical issue that led to the right-rear corner being coated in grease from an errant CV boot, forced Enerson to stop six laps short of finishing his ROP and kept the No. 75 entry in the garage for the rest of the day, leaving 34 of the 35 entered drivers to make use of Tuesday’s closing session.

Thanks to a series of rain delays, the final session got underway later than expected, with the field of ready cars and drivers motoring out at 4:10 p.m. ET.

Twenty drivers hit the track to open the session scheduled to run to 6:00 p.m., and the first significant lap around the 2.5-mile oval belonged to Chip Ganassi Racing’s Tony Kanaan in the No. 48 Honda with a 223.965mph. Conor Daly took P1 moments later in the No. 47 Ed Carpenter Racing Chevy with a 224.962mph. Stefan Wilson completed the final seven laps of his refresher run at 4:26 p.m. and was clear to lap at full speed for the rest of the event.

A caution at 4:46 p.m. was required when the right-rear corner on Sebastien Bourdais’ No. 14 A.J. Foyt Racing Chevy caught fire. He was able to make it to pit lane and have the fire extinguished by the team.

“There’s water everywhere,” Bourdais said of the back of the car after retiring for the day while holding P27 at 220.137mph. “The engine was running fine and the turbo was as well, so it was probably a clamp or something (that leaked oil). It’s probably burned a bunch of stuff but (I don’t think we need to change the engine).”

UPDATE: The yellow flag is out due to an incident involving the car of @BourdaisOnTrack. pic.twitter.com/NfsKB8RzD5

Big drafting trains developed as the last 30 minutes of the session arrived. At one point, nearly 20 cars were stretched from the entry of Turn 3 back to the exit of Turn 2. 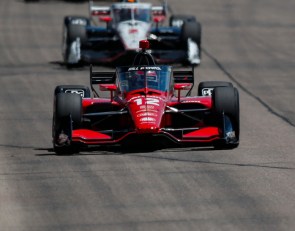 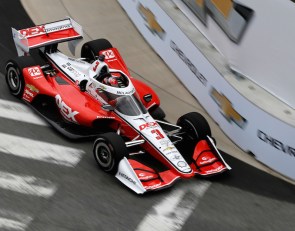