Valtteri Bottas refuted George Russell’s comments and blamed the Williams driver for their heavy crash in the Emilia Romagna Grand Prix, while the stewards chose to take no further action over the incident.

Russell accused Bottas of an “incredibly dangerous” defensive move, claiming the Finn jolted slightly to the right as the Williams was overtaking to the left, causing Russell to lose control. Russell also suggesting that Bottas would not have done such a move against another driver — referencing links between Russell and a future Mercedes seat — but Bottas heaped scorn on that claim.

“I’m always going to defend to any driver — I’m not keen to lose any positions. That was normal defending. It could have been a lot more aggressive if needed. I don’t agree with any of that at all. I was doing my thing. No matter who I would have been defending, it it would have been exactly the same.

The incident that brought out red flags in Imola 🚩#ImolaGP 🇮🇹 #F1 pic.twitter.com/Z18dCPXwOZ

“Obviously he knew exactly that it was going to be damp there, because we have gone there lap after lap. I knew as well, and it was just not a place to go in those conditions on slicks. But he still went there. It was his choice to go there; I was doing my job trying to defend, and I’m not going to move away and give him the dry patch back. That’s how it goes.”

Both Bottas and Russell had to go to the stewards after the race, but no further action was taken with the stewards calling it a racing incident and stating that Bottas maintained his line and “at no time did either car maneuver erratically.” While Russell angrily approached the Mercedes cockpit after the collision, Bottas says he was unaware what he was being accused of at the time.

“I couldn’t hear what he was saying. Obviously I had my helmet on, and not sure (if) the engine was running. I couldn’t hear a thing. So that’s that.

“From my side, it was quite straightforward: I was obviously defending my position. I think he had stopped two laps earlier, so he got his tires warm already, and I was struggling with the warm-up. I knew in that place it’s quite tricky to overtake, so obviously try to make sure that I don’t make space for him, but also sure that I leave at least one car’s width of space by the regulations.

“He went for it and obviously lost it and hit me, and it was game over. Yeah, I actually just now spoke with Toto (Wolff, team principal). He said he’s going to probably speak with him at some point as well, but that’s that. We went to the stewards together, and it was just really overall a review of the thing, and they wanted to hear comments from both me and George.” 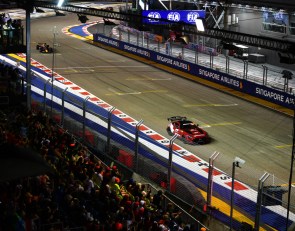