iRacing images via Road to Indy

A second mini-season of simulated racing competition for drivers on the Road to Indy will conclude tomorrow evening, June 2, with a pair of 20-minute virtual races at Iowa Speedway in Newton, Iowa. With eight races already in the books, Indy Pro 2000 competitor Phillippe Denes (RP Motorsport USA) holds a commanding 34-point lead over his closest challenger in the TireRack.com RTI iRacing eSeries Presented by Cooper Tires.

At stake is a valuable real-world prize from SimMetric Driver Performance Labs, the Official Sim Partner of the Road to Indy. With an on-site mobile simulator presence at all Road to Indy events, SimMetric will be providing the champion of the Tire Rack eSeries with a complimentary 30-minute simulator session at each race event on the real-life 2020 schedule which is slated to launch at Road America on July 9/10.

Californian Denes has claimed victory in four of the eight races so far. Only once has he finished outside the top five — in the opening encounter at World Wide Technology Raceway — when he was involved in a late-race incident while challenging for the lead. Last month, Denes secured the inaugural Ricmotech RRTI iRacing eSeries title with three wins in five starts.

The two mini-seasons of competition have raised over $4,400 for the World Health Organization’s COVID-19 Solidarity Response Fund, used to prevent, detect and respond to the coronavirus pandemic.

Braden Eves has been among the few rivals to compete with Denes on a regular basis. Sadly, last year’s USF2000 champion will not be able to challenge for the title tomorrow — but he has a good excuse: Eves, who is graduating this year to Indy Pro 2000, instead will be joining his Exclusive Autosport teammates in a real-life test at Road America in preparation for the resumption of racing.

The withdrawals will certainly allow Denes a clearer path to the title, although he will still face plenty of tough opposition at the challenging, high-banked 0.894-mile Iowa Speedway oval.

Legacy Autosport’s Andre Castro has won two of the most recent four races, while USF2000 rookie Max Kaeser (Miller Vinatieri Motorsports) has looked especially strong on the ovals. After finishing on the podium in both races at World Wide Technology Raceway, Kaeser claimed his first Road to Indy victory two weeks ago at virtual Lucas Oil Raceway.

Indy Lights racers Daniel Frost (Andretti Autosport) and Toby Sowery (Belardi Auto Racing) also can be expected to shine. Frost lies sixth in the points table following a string of consistent finishes, including a podium at World Wide Technology Raceway. Sowery only joined the eSeries fray two weeks ago after awaiting delivery of his simulator equipment to his home in Cambridge, England. He failed to make the field at Lucas Oil Raceway but was a leading contender last time out on the Watkins Glen road course.

The action will begin tomorrow at 6:45 p.m. EDT. Race 1 will start at 7:00 p.m. The finishing order will determine the starting grid for Race 2, albeit with the top 10 positions inverted. 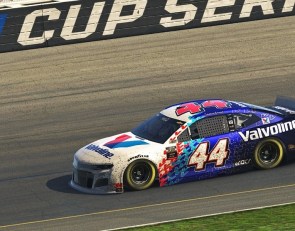