Project cars are hard. Case in point, when we left off with our Classic American Muscle CAM-S twin-turbo V8 beast we were getting the long-block assembled, and what took a week on RACER.com was almost a year in the works. Now it’s time to work on the peripherals.

The switch from the stock cathedral-port LS6 cylinder heads to the GM Performance Parts CNC ported LS9 cylinder heads necessitated an intake manifold replacement, as the new heads featured a rectangular port. Additionally, the new heads combined with our Comp Cams valvetrain upgrade meant that the engine had the potential for increased airflow, so it was time to look for yet another upgrade.

The latest intake manifold from Fuel Air Spark Technologies, the Fast LSXR 102mm, would serve to increase air capacity over the outgoing LSX 92mm unit previously fitted to the engine. In addition to the larger opening at the front of the intake, the modular design of this manifold allows access to the inside, which features a patented removable runner design that can be replaced with alternative length units offering the capability to shift torque and horsepower to a higher rpm than the original version. If you want more low-end grunt, simply utilize the longer runner set; for a high-rpm screamer, the short set would likely suit your needs.

According to the team at Fast, the Race runners provide a 15-30hp gain with a 1,000-2,000rpm upward shift in peak horsepower, but that means a loss of some low-end torque. With our 427ci displacement and a pair of turbos, however, we aren’t particularly concerned with a lack of low-end power, so we opted to use the short Race setup.

Our original throttle body was a dated, custom unit out of the Lingenfelter shop and was far too small to pair with the new intake manifold from Fast. Our search brought us to Granatelli Motor Sports, which offers large-bore throttle bodies for a wide range of automotive fitments. For our application, Granatelli suggested the 103mm LSX Drive-By-Wire unit.

Machined from 6061-T6 billet aluminum, the 103mm throttle body is fitted with a strong electronic motor that can handle upwards of 25lbs of boost, making it a great fit for our project. It should be noted that a patch harness had to be sourced since the newer style throttle body utilizes updated GM connectors; this is a pretty common modification, however, and even we found it easily performed.

We capped off the progress with the engine with a bit of vanity, opting to ditch the stock valve covers in favor of a set of Comp Cams LS Billet Valve Covers. The LS covers offer increased clearance for items like the shaft mount rocker system and provide internal valve spring oiling.

One area of the old build that was beginning to show signs of weakness was the clutch. Since we weren’t sure how old the previous setup was, and we could see it slipping during dyno runs. If it couldn’t handle the old engine, it didn’t stand a chance with what we were currently building.

Talking with OS Giken, who might be best known for its Super Lock limited slip differentials, we discovered they have a lot of experience with LS-based clutch packages. Apparently, they are popular swaps with the high-powered drift crowd.

“We see a lot of people using the LS in Japanese cars for drifting,” says Sean Fenstermacher. “The floating center hub on the R3C Triple Disc Clutch Kit is a part we can swap out for one with different splines, so if a customer is pairing it with a different transmission, we can change that one piece, making it an easy transition.”

The R3C pairs an aluminum clutch cover sporting a unique cage design with a steel flywheel for optimum strength and durability. “What really sets an OS Giken clutch apart is the housing,” says Fenstermacher. “We are one of just a few manufacturers that use a housing. It’s a ‘C’ channel that sits like a crown on the flywheel, and it gives the entire clutch assembly a huge amount of rigidity.”

Additionally, OS Giken takes the steps of heat-treating the flywheel, the hub, and the clutch housing, further helping these components deal with on-track abuse.

The clutch material, Fenstermacher explains, plays a role in repeatable performance and drivability, you can still attain great holding power without going to exotic disc materials that sacrifice control. “We want to be able to hold if it’s cold or hot – we don’t want the characteristics to change with temperature,” says Fenstermacher. “It’s a metallic, but it’s fairly low on the scale of Mu, so it’s a low-friction metallic. We feel it’s a very comfortable compromise between having a good amount of friction and consistency.”

Technical composition aside, we were delighted to see the new clutch package shaved 12lbs of weight off the crank when compared to the previous twin-disc setup, which should certainly help get the revs up quicker.

Next on the agenda is to put the engine back in the car, at which point we can tie up a few loose ends, like the fuel injectors, fuel rail, and ignition coils. Hopefully, this next step won’t take us nearly as long to complete. 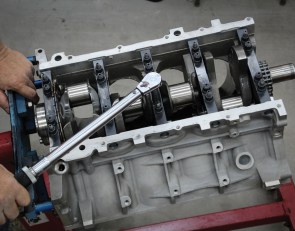 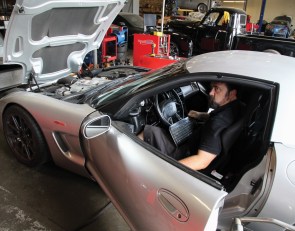