Virtual weather added a few new wrinkles to the third round of the Formula Regional Americas iRacing Invitational Championship at Virginia International Raceway, with high termperatures and humidity creating a foggy backdrop. It didn’t bother FR Americas iRacing guest Phillippe Denes, who showcased his sim skills to disappear into the distance to win by more than 18 seconds over of Round 2 winner Dario Cangialosi, who nursed a wounded car over the stripe for a second-place finish.

After a tough round at Circuit of The Americas, Quinlan Lall excelled around the foggy Virginia circuit to complete the top three.

“It was a good race,” said Denes. “I focused on being consistent, laying the laps down with no interruptions going quicker and quicker the entire race. Catching up with traffic, everyone was racing clean, and I felt good behind the wheel. I look forward to finishing out the balance of the season.”

Denes, who has dominated multiple series’ iRacing challenges since the racing lockdown started, arrived with something to prove, jumping to the top of the qualifying times early in the 10-minute session. Denes took pole position by .339-seconds over F1 Esports Driver Cem Bolukbasi. The 2019 F3 Americas champion Dakota Dickerson and Lall clocked identical fliers of 1m42.879s to slot into a second row start.

Off the F1-style standing start, Denes got the jump on the field and never looked back, eventually locking down the largest margin of victory so far in the simulation championship.

Dickerson was hot off the line, shaking off Bolukbasi on the opening lap after the esports racer got entangled with fellow guest driver and SCCA Pro iRacing Fan League winner Simon Sikes. The wreck sent Bolukbasi to the pits, ending the Turkish driver’s debut round early.

Cangialosi, watching the carnage from a short distance, slotted into third and began hunting down Dickerson. Stuck to Dickerson’s gearbox, Cangialosi and the reigning title holder made incidental contact that sent Dickerson spinning off track and down the racing order.

“I am still getting used to sim racing,” said Cangialosi. “I knew Dakota was right there and I hit a bump on the exit. Before I knew it, my front wing was in the back of him, which I am really sorry about. Otherwise, it was a fun race and I had a lot of fun coming up through the field.”

During the battle between Dickerson, Cangialosi left the door open for Sikes to move into second with a close-following Lall taking over third. Sikes didn’t hold the podium position for long, spinning at the entry of Oak Tree after hitting the curbing.

Cangialosi moved into second and Lall spent the rest of the race chasing him down, finishing with his first podium so far in the seven-round championship. Sikes recovered from the early spin to finish fourth.

“I had some clean space between Dario and nearly chased him,” Quinlan said. “I was chipping away at him and hit lapped traffic in a bad spot that allowed him to pull away. With this fog, I really couldn’t see much in front of me, so I am appreciative of my spotter. Without him I wouldn’t have made it to the podium today. He was my secret weapon.”

With the leaders spreading out over the 18-lap feature, the best battle of the night was between former Global Racing Group teammates Blake Upton and Dickerson.

It took several laps for Dickerson to successfully recover from the early spin in order for him to make a move on Upton for fifth. On Lap 15, Dickerson made an unbelievable move on the FR Americas driver. Upton defended the over-under heading into NASCAR but Dickerson continued to pressure Upton into the Esses, slipping into the inside of Upton for fifth place. Upton stuck to Dickerson’s gearbox for the remainder of the race but was unable to repay the favor, settling for hard earned sixth-place finish.

“Wow, what a battle,” said Upton. “It was refreshing racing against Dakota again. I trust him to always race me clean and after going hard with each other he forced me to the outside to slide past me on the inside. It was a fun race and I am looking forward to another great race next week at Barber.”

FR Americas driver Logan Cusson charged from a 25th-place start to finish seventh, taking third in the Sabelt Hard Charger season battle behind leader Jordan Missig (37 position advances) and Dominic Livernois (25 overtakes). F4 U.S. rookie Hunder Yeany has made up 21 positions total followed by Hayden Bowlsbey with 19 overtakes over the last three rounds. The Sabelt Hard Charger contingency prize pack, complete with a Sabelt product certificate, will be awarded to the driver with the most position advances in the seven-race iRacing championship

The FR Americas iRacing Invitational Champion will win a set of Hankook Tires while the Vice Champion will be presented with a 90-day virtual training package from PitFit Training. Third overall in points will receive an Omologato watch.

The top-three competitors in each event will be awarded with official Druck FR Americas merchandise to sport during the 2020 season.

The FR Americas iRacing Invitational Championship returns to action on Tuesday, April 14, with a mix of new and returning drivers. Round 4 will be held at Barber Motorsports Park with live streaming coverage sponsored by PitFit Training starting at 7:10 p.m. Eastern.

The event schedule will include one 10-minute practice, one 10-minute qualifying and one 30-minute race with points following the FIA FR system. The championship will be calculated based on the top six results (allowing one race to be dropped). 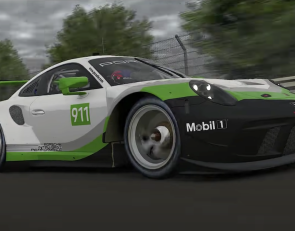 Why iRacing can now afford to be choosy