Initially, there was a level of confusion surrounding the line from the FIA that stated that competitors “must enter a homologated car under the name of an automotive brand”. While that could be interpreted as a rule put in place to prevent private teams from entering their own chassis, it is not the case.

The ACO and FIA’s vision for the class is for it to be flexible on who enters, but encourage support from manufacturers.

“You must be very focused on what is written in the announcement from the ACO,” Beaumesnil said. “We have introduced some rules that will enforce cars to enter under an automotive brand.

“When we speak about the brand, we don’t require a manufacturer to commit itself, but in the philosophy perhaps of Alpine and Aurus in LMP2. (ED: Both use rebranded existing chassis). We believe today that by encouraging this, we will also bring some more support to private teams and to expand the field of cars racing (in the top class).

“We think that the concept of it, basically, is to have the most extreme cars in the world that we see on the road, and also to provide the fans and the media (with) cars that they can clearly identify as a brand. We know that brands are very popular, and we introduced this system to encourage this.

The LM24 LMP2 class-winning Alpine A470 is essentially an ORECA 07 in fancy dress, and the ACO and FIA is considering allowing similar rebranding to help boost its Hypercar numbers. Image by JEP/LAT

“Obviously, our intention is to be quite flexible with this because we don’t want to produce too strict parameters in terms of production volumes or whatever, because many car brands today are very small volumes in the field of hypercars, and we don’t want these very small companies (that are) very committed to building hypercars to be out of the game.

“So this is why we are introducing this principle, and also why it will be left at the discretion of the Endurance Commission for an evaluation of hypercar projects on a case by case basis. The final intention is that when we see the car, you will understand that this car recognizably belongs to, or is allied to, a brand. And we will work on creation of the design as well.”

As it stands, Beaumesnil says there are no current Le Mans Hypercar projects that would be effected by these new rules. This is in part because beyond Toyota, Aston Martin and Peugeot’s programs, Glickenhaus is a registered OEM in its home market (the USA) and ByKolles plans to build road-going versions of its hypercar.

ByKolles would also be allowed to race its hypercar before its road cars hit customer hands, in the same way that Ford was able to race the GT before the road car was delivered to the public.

“At some stage you need to try to be clever in order to help the sport, and you will remember that the Ford GT was racing before you could buy it from a showroom,” Beaumesnil said. “If we would have not been flexible enough to find a way to make this entry and to get some guarantees of the future arrival of the road cars on the market, we would not have had this car on the grid, and that would have been damaging for the sport.”

So where are we now on Hypercar? In addition to Glickenhaus and ByKolles, we have three major manufacturers signed up: Toyota and Aston Martin for Year 1 and Peugeot for Year 3. Both Toyota and Aston Martin continue to be in a race against time to ensure they are ready for the start of the 2020/21 season. Right now, Toyota looks to be (understandably) ahead of Aston Martin in the development of its hybrid-powered GR Super Sport, but even that will not hit the track for testing until after Le Mans 2020.

What will Aston Martin’s non-hybrid Valkyrie program look like? The expectation of more than two cars featuring on the grid for the first season appears to have cooled, along with the prospect of R-Motorsport running customer cars from the beginning. Aston Martin has told RACER that nothing has changed since the program announcement at Le Mans last year. The project is ‘on track’.

Peugeot meanwhile, has time on its side, but along with partner team Rebellion, is starting from a blank canvas. The question right now is whether or not it can get its car ready long enough before the start of the 2022/23 season, take part in the tail end of the 2021/22 season and get a Le Mans under its belt before its first full season?

The remaining potential programs are all from either left-field projects or OEMs that are yet to state any level of intent in the public. Beaumesnil told RACER that he is “quite confident that there is more to come.” But just what or who he is referencing is an unknown.

All the potential new programs are in a more exploratory stage, in part because the DPi 2.0-Hypercar convergence talks are yet to produce a firm outcome. Beaumesnil stressed that the ACO is “connected” with IMSA “nearly every day”.  So just who is in play should we get further clarity on what the options are?

Ford, Porsche, Ferrari, Bentley, Brabham and Gordon Murray Automotive are all known to be taking a look. The allure of the Le Mans 24 Hours Centenary in 2023 looks to be playing a part in decision-making, too. But it remains to be seen if and when we will see more efforts step forward. 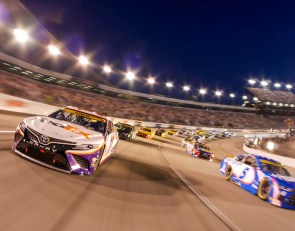 OPINION: The tides have turned in NASCAR's playoffs fight