You know the story by now. Change a few names and dates, and the same dispiriting tale from 2015, 2016, and once more in 2017 applies: Monterey County is upset with SCRAMP and has, in a new twist, made a plea through the media for new parties to take over the running of its motor racing circuit, WeatherTech Raceway Laguna Seca.

It’s the governmental equivalent of ‘Groundhog Day’ where the same sad movie, featuring constant turmoil and upheaval, continues to erode Laguna Seca’s reputation. On its current trajectory, the circuit’s long-term survival could also be in jeopardy.

Familiar themes are at play in the latest edition of the love/hate relationship between the county that owns the park which contains Laguna Seca, and the Sports Car Racing Association of the Monterey Peninsula, the only circuit manager it has known since the road course opened in 1957.

It’s the new themes, however, that give rise to the greatest fears.

Why is the county pining to jettison SCRAMP in favor of a new entity? Financial mismanagement? Gross incompetence? Misappropriation of funds? Gaffes and grand embarrassments to the county? While searching for the reasoning behind the county’s quest for a managerial change, the usual suspects are missing.

“I don’t know what their beef is,” Mario Andretti told me.

The legend among legends has been a staunch supporter of SCRAMP. After learning of Monterey County’s latest hostile maneuvering, the 1969 Indianapolis 500 winner sent a letter to its elected officials to ask for a cease fire and the authoring of a peace treaty.

“I said, ‘I urge you not to get caught up in dialogue about who might be able to do it better,’” Andretti continued. “‘You’ve got the best. SCRAMP is the most qualified to do what you need done. And they can do it with a long-term agreement that is structured to allow them to do what needs to be done. The transition to a modern motorsport venue is showing; you should continue it.’”

Sadly, in the county’s new ego-driven stance towards Laguna Seca, Andretti’s pleas for continuity could be dismissed.

Spanning wide-ranging conversations over the last week with Monterey insiders and executives who are familiar with the contentious situation, the urgency for change could come down to something as simple as a frosty relationship between the men in charge on both sides of the SCRAMP/county divide. SCRAMP’s new CEO, hired in 2018 and tasked with performing sweeping changes to its practices, has been on a mission to turn the organization into a proper business. Personality clashes aside, the process has generated positive results.

Another initiative, where the county wants to expand a business plan where it pulls the strings of its next track manager, has also been cited as the impetus for ousting SCRAMP in favor of hand-picked puppets.

Having long conceded its lack of qualifications to operate a motor racing facility, the county has hired racing experts to run Laguna Seca since it was gifted the property by the military in the 1970s. Of late, the county has come to the fantastical notion that it knows enough to take charge of the circuit and install pawns to do its bidding.

Considering all the questions to raise, how Monterey County has come to allow puppeteers to rise within its halls and manipulate Laguna Seca at will is the hardest to answer.

In a truly archaic scenario, a new, all-powerful handler is assigned to Laguna Seca every couple of years as elected members of Monterey’s board of supervisors move in and out of office. Recently, responsibility has shifted and the Laguna Seca baton has been passed to its non-elected assistant county administrator. Give it a few years, and the track will be dumped on someone new who, like all of their predecessors, has no experience in motor racing or grasp of the intensely challenging times the sport is facing.

Some of the handlers have embraced their lack of knowledge and let the experts work without interference. And some, as SCRAMP has come to learn, wield their control of Laguna Seca as a means to bully, micromanage, and punish. Spin the wheel of county personalities, and Type As, Type Bs, and Type MFs have all held the keys to Laguna Seca’s fate.

Having survived hard times, and while in the process of turning itself around, SCRAMP or its successor will have more instability hurled its way by the county as new controllers rotate in a few times every decade. Those people will, as history has shown, spend most of their time in office learning the basics of the strange and specialized world of racetrack management. And just as they’ve grasped the basics, they’ll be cycled out of office. Then the process starts anew with another neophyte who, in a few years, will hand the reins to another neophyte who’ll start from scratch, and so on, and so on. It’s madness.

If and when the Pulitzer organization adds a category for ‘Most Asinine Business Practices,’ Monterey County is a lock to win for its baffling approach to Laguna Seca.

In one of the county’s finer Groundhog Day episodes, it voted to part ways with SCRAMP after selecting the ‘Friends of Laguna Seca’ group to take over management of the facility. The planned change from SCRAMP to ‘Friends’ might have been amazing, if not for the County’s dreadful handling of the negotiations.

The powerful Friends assembly, comprised of local business owners, racing experts, automotive event promoters, and wealthy executives deeply involved in the sport, offered to infuse the facility with new ideas and, critically, millions of dollars to bring the circuit out of decades of disrepair. With the county unwilling to spend money on its aged circuit, the Friends were ready to fill the financial void and bring Laguna Seca up to par.

Dazzled by the eight-figure offer, the county dropped SCRAMP in an instant. What the county didn’t anticipate was for the savvy Friends group to insist on being treated as more than cash-wielding idiots. The Friends demanded the autonomy required to revamp the circuit’s dysfunctional business model, overhaul and modernize the property to meet higher standards for its fans and, in time, recoup its big, upfront expenditures.

Chosen by the county in October, the influential ‘Friends’ team was gone by mid-December as Monterey’s board of supervisors was left scrambling to find a new track manager when the Friends were unable to come to terms on a mutually beneficial contract and walked away from the table.

The seeds of puppeteering, according to Friends member Gordon McCall, were evident in those early negotiations. In turn, it led to the county’s failure to sign the group it chose, and the embarrassment of having to ask the jilted group at SCRAMP to stay on and continue running Laguna Seca under the new three-year contract that’s due to expire at the end of the year.

“What was a priority for us was a long-term, 25-year lease,” McCall, the force behind Monterey Car Week and the renowned Quail Lodge gatherings, said on Thursday. “We asked the county to get out of our way in exchange for running the track and handing the county a check every year. We needed time, and under that current request, it isn’t offered. What they’re wanting is a manager who wants to be managed, and that’s not us. So, we weren’t interested in moving ahead then, and we’re not bidding now.”

Rather than continue to subject the track to the short-term whims of temporary stewards appointed from its board of supervisors or administrative offices, Monterey County needs to hire an expert of its own.

Find a proven, trusted veteran of racetrack management, sign that person to a long-term contract, and step aside so they can work directly with SCRAMP, or an independent organization like SCRAMP, as the eyes and ears of the county. Let the county’s in-house racetrack manager collaborate with the vendor’s leadership to make the necessary circuit improvements, optimize its business practices, liaise with the county on major decisions, and use his or her knowledge to secure the track’s future.

It’s time to end the lunacy of empowering elected officials and administrators — the racing or business rookies — to brandish temporary control of Laguna Seca. As much as some within the county believe it needs say farewell to SCRAMP, the smartest call would be to abandon its senseless oversight policies.

“The Laguna Seca facility was just brought back from a state of despair to one that is respectable, and suited to host the events it is now hosting, including IndyCar, IMSA, and Trans Am,” Andretti added as he continued reading from his letter to the county. “There is much more work to be done, and because of that, I strongly recommend that you stay the course with SCRAMP.”

We’ll know before the end of the year whether Mario’s wisdom is heeded, or if a new episode of Groundhog Day is being readied in Monterey. 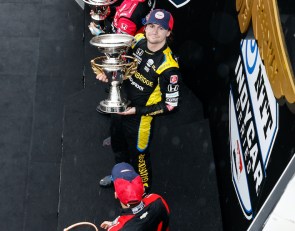