William Byron had not yet been born when Ray Evernham hung a checklist on the shop wall at Hendrick Motorsports for his No. 24 team.

It was 1994, and Evernham was in his second NASCAR Cup Series season guiding young Jeff Gordon. As the team started to get its legs and find its groove in the series, Evernham posted a checklist of accomplishments to strive for that read “From Nobody to Upstart – From Upstart to Contender – From Contender to Winner – From Winner to Champion – From Champion to Dynasty.”

By 1997 – the year Byron was born – Gordon had crossed off four of those five items. Byron is now approaching the end of his second full season in the series driving the No. 24 Chevrolet and believes he and Chad Knaus are beginning to build something sustainable.

“We’re kind of starting to hopefully check those off the list for us,” Byron told RACER this week. “You can’t just ask for us to go out there right away and light it up, and I think this year has been a good directional improvement for our team, and that’s what I’m excited about. I was disappointed after the race (in Kansas and being eliminated from the playoffs); it was bittersweet because it’s kind of that empty feeling of, hey, I finished well, and we’re running well, but what does that really mean? It’s all about taking that next step. I think we’re in position to do that.”

That checklist lives on in a new way as Byron revealed there have been subtle reminders, mentions of it, and even different words his team uses around the shop nowadays. Plus, Knaus, who was a member of Evernham’s team back in the ‘90s, recently found the original checklist, sent a photo of it to Byron and has since given it back to Evernham.

“I think it’s cool to have little things like that to strive for,” said Byron, “and that’s really what we came into this year what it was all about. Chad always wanted to work on and be a crew chief of the 24 car, and for me to be the driver of the 24, those are some cool things that we don’t take lightly, and we want to do it justice.”

Eliminated after the second round of the postseason, Byron put the focus on the positives. Being aggressive in the playoffs is a must, and a team needs to have its ducks in a row or its weaknesses will be exposed. With such experience, Byron is already looking at the 2020 season and how he believes his team will approach it differently.

Learning and developing has been a theme for Byron and company this year. It has been more fun than last year because he’s been able to sit on poles (five), lead laps (225), and run up front. In doing so, Byron has been around contenders like Kevin Harvick and Martin Truex Jr.

“Those are guys that I was usually getting lapped by last year,” Byron said, “so to go from being lapped on a consistent basis to now being with them and amongst them, and learning the craft that I have to have racing up there versus racing 15th to 20th, it’s a much different ballgame. That’s what I’ve learned this year.”

Byron was a second round elimination in the playoffs, but still has unfinished business in 2019. Image by Thacker/LAT

Team-wise it’s important to note it wasn’t Knaus who has been a new addition. In the words of Byron, the team is “totally different,” and it has brought a different approach to a way of doing things, the engineering group, and other areas. And while Byron was optimistic from the start, seeing how it has developed and played out this year, “I can’t wait to see, if we keep that same group intact for a few years, how it goes.”

One accomplishment Byron is eager to check off is winning in the Cup Series. Not having that come easy or quick is a different feeling for Byron after consistent success on his way up the racing ladder. Except, it takes more time, he said, to build something in the Cup Series.

“I think it’s taken us this amount of time to get where we really want to be with the car, and I think that’s been a big improvement for our speed,” he said. “The other series, I had teams and people that were in place for a long period of time that I was just plugged into. I was plugged into a good [Kyle Busch Motorsports] truck. I was plugged into a pretty stable organization at JR Motorsports, and kind of all the way through the ladder, I was just a driver.

“Now, I’m having to be a leader. I think there’s a difference in being a guy that drives and a guy that leads and drives and leads by example. That’s what you have to be in the Cup Series to be successful.

“It’s a totally different mindset. Sometimes I feel like people around me get a little bit impatient: ‘Hey, when are we going to win? When are we going to do this?’ And it’s like, it’ll come. It’s not one of those things that you could just wake up one morning and say, ‘I’m going to win.’ You’ve got to do this, this, and this, and you’ll have a shot at winning. I think from the outside it’s go win, but for us, we’re just kind of getting to that point.”

Byron has four races left to go from contender to winner in his first two Cup seasons.

“I don’t know if a letdown would be the right word, but there would definitely be more to be desired,” he said when considering the possibility of a winless 2019. “To break through and break that mold and get a win is going to be a big step for us. But once we do break that seal, it’s going to come naturally.

“Even if we don’t get it at the end of this year, we are going to be ready to win next year. And I think we’re going to go out with that approach right off the bat in 2020.” 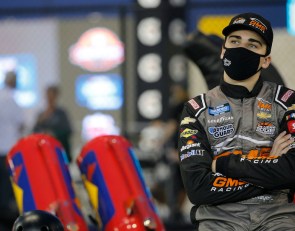