Anthony Seaber entered the 2019 SCCA National Championship Runoffs at VIRginia International Raceway (VIR) as a rookie and started the Formula Mazda race on Sunday afternoon in pouring rain. For 15 laps, the rain kept falling harder but Seaber, of Hillsborough, North Carolina, kept getting better and left with a gold medal and a 33.590-second win. Robert Noell, of Kure Beach, North Carolina, and Owen McAllister, of Mooresville, North Carolina, completed the podium in difficult conditions.

Seaber started the race second in the No. 09 Bob Wheless/VIPER Formula Mazda and was following the spray from the tires of Bryce Cornet. Coming out of Turn Five on the eighth lap of the race, Tire Rack Pole Award winner Cornet finally turned sideways and slid across the pavement, recovering but leaving the door open for Seaber.

“I’ve been chasing this for a very long time,” Seaber said. “It’s been a long time since I’ve been to the Runoffs. I’m very happy to be back. I focused on this for the entire year to be able to get up here on the podium and win. I could not be happier.”

Once in front with clear vision, Seaber marched away from the field for the victory in his first Runoffs appearance since 2002. The caution-free race covered the 49 miles in 35:30.824, averaging 82.869 mph.

Cornet, the defending class champion, couldn’t seem to find any amount of grip – even compared to the others in the class. His No. 65 machine was twitchy even in a straight line and was a sitting duck as he tried to put the power down.

Noell drove his No. 3 First Pencil/Karl Burke Racing Formula Mazda around Cornet and into second place on lap 12 after cutting through a substantial gap. Noell had moved around Nathan Ratton on the start and was all alone through the race with no chance to challenge Seaber.

“I’m really happy to be up here,” Noell said. “I knew he was going to be tough, especially here in the rain. I’ve never been in conditions this bad. With five laps to go, it just kept getting more and more rain. I’m lucky to be here, because I almost lost it several times.”

McAllister started fifth and moved around Cornet to third with one lap to go. The 14-year-old driver is among the youngest to ever finish on the Runoffs podium. He also earned the Sunoco Hard Charger award after starting fifth.

“It was really getting bad out there, especially toward the end,” McAllister said. “The rain just kept coming and coming, and it progressively got worse throughout the session. The visibility was horrible. I was hydroplaning on the straightaways. It was not easy conditions, but it all worked out well.” 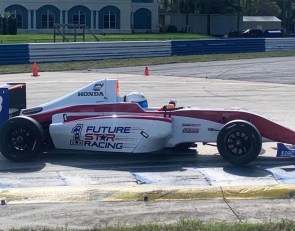