NASCAR’s Scott Miller said it was “pretty clear cut” that Johnny Sauter violated the yellow line rule at the end of the Gander Outdoors Truck Series race at Talladega Superspeedway.

Sauter crossed the finish line first, but was black-flagged and placed 14th (the last driver on the lead lap) in the finishing order. Coming to the checkered flag, Sauter, who was leading, blocked Riley Herbst’s run to his inside and forced Herbst below the yellow line before going below the line himself.

The penalty gave the win to Spencer Boyd.

Bizarre scenes at @TalladegaSuperS!@JohnnySauter is penalized for forcing Riley Herbst below the yellow line in the tri-oval, meaning @SpencerBoyd is your @NASCAR_Trucks WINNER! pic.twitter.com/1mNJHSidQy

In the process of blocking and being the leader, Sauter might have been given leeway to have some of his car below the line, but Miller said not all four tires. He also reiterated that drivers are asked to race above the yellow line.

Sauter initially celebrated what he thought was his second win of the season, while NASCAR put the finish under review. Boyd, who had crossed the finish line second, was then declared the winner. It was Boyd’s first career win in the series.

Crafton on standby for Menard at Talladega

Miller explained the end of the race is very fluid from an officiating standpoint.

“There’s obviously a lot of moving parts in the tower, so when the cars are coming to the line, our first order of business is to watch and make sure there’s not cars flipping back in the tri-oval,” he said. “And then it was brought to our attention that we might have a situation with the 13 (Sauter), so then we look at all the replays from there and make our determination.”

“It’s whatever,” Sauter said. “We did what we thought was right to win the race. Whatever. You got rules, you got rules, I guess.” 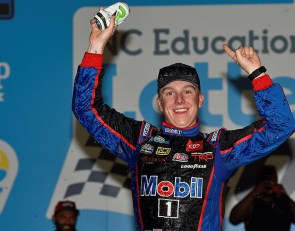