AJ Allmendinger stole the thunder from a series of intense battles among NASCAR Xfinity Series Playoff drivers to win Saturday’s Drive for the Cure 250 at the Charlotte Motor Speedway Road Course.

Allmendinger muscled his way past series leader Christopher Bell as the cars climbed from the infield section onto the banking on Lap 48 of 67 and held the top spot through three subsequent restarts in the action-filled second race of the Xfinity Round of 12.

CHECKERED FLAG: @AJDinger gets it done at the Roval!

The road course ace scored his third victory in 16 starts in his series, finishing 2.386 seconds ahead of Richard Childress Racing’s Tyler Reddick during a three-lap run to the finish.

“Whooo! Damn, I’m tired—thank you everybody!” Allmendinger said during a postrace interview beneath the flag stand. “I can’t thank (owner) Matt Kaulig enough, first of all. He put his belief in me, wanting me to come here and help build this team.

“I have to thank Tyler Reddick– he’s phenomenal. He told me when I got here I needed to get better on the road courses, because he out-qualified me in every race lately and even beat me in a couple.

“I knew with him behind me (for the last two restarts), I could be defensive on the right side and give myself an angle, and Tyler wouldn’t shove down in there. I appreciate that. I tried to change the restarts up enough each time, but you can only do so much. I knew once we got into clear air, this thing was good. In traffic, it was a struggle.”

For the final two restarts, Allmendinger lined up next to Playoff driver Austin Cindric, who broke a rear shock and lost the runner-up position to Reddick on the penultimate lap. Cindric held third over Justin Allgaier, with Noah Gragson securing the fifth position after starting from the rear of the field in a backup car.

“I wish I had a chance to fight the 10 (Allmendinger) there at the end, but under caution I felt a shock mount break,” Cindric said. “The right-rear shock was clean off the race car before I even restarted the race, so I’m glad I didn’t wreck, and I’m glad I finished third.

“I guess all of that is positive, but at the same time, I felt like we had a good shot, especially if the thing would have gone green, to try to pressure him into a mistake or getting a good lunge, but, all in all, a great points day, a great day for the MoneyLion Ford Mustang. We’ve got to keep it going this way.”

While Allmendinger was enjoying the clean air at the front of the field, the top drivers in the Xfinity Playoffs were busy salvaging respectable finishes from a litany of troubles.

After giving up the lead to Allmendinger, Bell drew a penalty for blowing the final chicane while racing side-by-side with Chase Briscoe, but not before contact between their two cars sent Briscoe spinning between Turns 2 and 3 on Lap 58.

Already qualified for the next round of the Playoffs after last week’s victory at Richmond, Bell recovered from a rear-of-the-field penalty to finish 12th and maintained a 10-point advantage Cole Custer, who came home eighth after spinning in Turn 1 during a multicar mashup on Lap 44. Despite the wild day, Custer was able clinch a spot in the Round of 8 on points.

After his spin on Lap 58, Briscoe charged through traffic to finish ninth and heads for next week’s elimination race at Dover sixth in the standings—46 points behind Bell but 35 ahead of ninth place John Hunter Nemechek, who ran seventh on Saturday. The Playoff field will be cut from 12 drivers to eight at Dover. 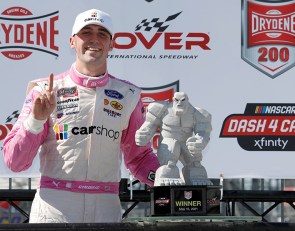 INSIGHT: The Month of May has arrived. Here's what to watch for