The 50th anniversary of Formula Ford racing in the U.S. has been a major talking point in 2019, triggering discussion about the revival of FF that is music to Jay Ivey’s ears.

“Revival is survival,” says the Portland, Oregon-based proprietor of Ivey Engines, a family firm that hitched its star to the classic Kent Ford Crossflow engine nearly 40 years ago.

A tireless hard-worker who has been everywhere, and attended almost every major event in this FF50th spring and summer, Jay Ivey can tell you a thing or two about the Kent Formula Ford engine — all of the clearances and gaps and ratios to the thousandth — but he cannot tell you how many FF engines he’s built and rebuilt over the last three-and-a-half decades.

Nor can his sons, Cameron and Colin, who have stepped into the significant roles once occupied by dad Jay and mom Susan with incredible aplomb (although they have detailed records on every engine built and rebuilt, and will count them all up someday).

His dad, Sam — a much-traveled field test engineer for Detroit Diesel — had instilled in his son a love of engines and a peerless work ethic that has served Jay well.

His dad gave him a Corvair on his 16th birthday with the proviso that he get it running, and he took teenager Jay out on the road as much as possible — to GM Research; to the Bonneville salt flats — keeping him immersed in engines. It was a family thing: Jay’s uncle Bill ran the Ford Motor Company dyno for many years and once got his young nephew access to the underground storage area where the engine and gearbox from the ’66 Ford GT40 Le Mans winners were kept.

In 1976, another Bill (Snyder, of ThermoKing) got 21-year-old Jay a pass into Gasoline Alley at Indianapolis where he met his hero, A.J. Foyt, and engaged him in a discussion about tools, deciding there and then that he would find a way back to the Speedway someday.

He remembers a friend, Jeff Kenney, introducing him to “Formula Ford” which he would hear more about several years later, working at another friend’s foreign car repair shop in Gresham, Ore., and sales-repping a gasket sealer product, Gasgacinch, which led him to FF dealer and distributor Pierre Phillips and son Tommy.

Via the Phillips’ enthusiasm, Ivey was soon hooked on FF racing, and when he discovered Loyning’s shop right across the parking lot, he began wheeling engines he had rebuilt over to show Arnie and needling him for a job.

Eventually, Arnie relented and Ivey spent a busy/happy 18 months working for one of America’s premier FF engine builders and uncovering a passion for the racing version of the four-cylinder Ford Crossflow engine.

He left in late spring 1983, though, first to work on BMW engines for Ira and Lori Young; later to open Ivey Engines across town from Loyning’s with a push and backing from Wall Street trader (and former Formula Atlantic driver and team owner) Jim Morgan.

Ivey had been introduced to Morgan by the Phillips’ who also connected him with Mike Gue and Phil Creighton, proprietors of Grand Prix Race Cars/Essex Racing, the Van Diemen importers on the East Coast, who needed a larger engine supply to keep up with demand for their hot-selling FFs.

The business relationship with Morgan ended quickly, but Jay had his dyno, his first employee, Chuck Yett, and customers. With wife Susan taking care of the books from home as she tended to infant son Javan, Ivey Engines was off and running.

Gue and Creighton purchased the first Ivey-branded Kent FF engine for their customer Ken Gordon, but much to their (and many of his early customers’) dismay, Ivey painted all of his Ford blocks Detroit Diesel green in honor of his father. They were at best unattractive, but no one thought to complain to Ivey until 1986 when Mexican FF racer John Franco Cane showed him how his had been repainted.

Ivey began to notice others doing the same, and his engines have been signature maroon ever since.

Ivey engines have been a readily recognizable red since 1986.

Loyning’s engines finished 1-2 (R.K. Smith-Bob Lobenberg) at the Runoffs in 1983, but, courtesy of Texan Kim Campbell’s third, an Ivey engine was on the podium. He would not win the Runoffs until 1990, powering Tony Kester’s much-modified Reynard; but in 1985, an Ivey engine won the British Formula Ford Festival courtesy of future F1 racer Johnny Herbert driving the unique Quest — to date, the only Festival win by an American tuner.

As much as power and reliability, relationships have been not only the starting point but also the primary driver of Ivey Engines’ success. The engine supplied to the Quest team, for instance, was a direct result of a relationship with Californian FF racer Ron Giery, who had taken an Ivey cylinder head with him for a Festival run the year before and qualified well with it in his first taste of Brands Hatch.

While the top step at the Runoffs proved elusive, Ivey’s engines soon had a nationwide following, stepping into the breach of a serious issue plaguing all FF runners in the 1980s and ’90s: the supply of key engine components drying up, with most of the parts long out of production and wrecking yards in England and America emptying out. 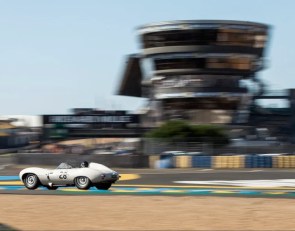