The 2019 6 Hours of Spa-Francorchamps is handing the current FIA World Endurance Championship LMP1 crop a chance to run their low-downforce aero packages in preparation for the ‘Super Season’ finale next month at Le Mans.

Rebellion Racing is the only team running brand-new aero, its R-13s looking strikingly different in their new package. The Swiss team tested it for the first time at Aragon last month alongside SMP Racing and Ginetta with its now-AER-powered G60-LT-P1. It was a successful run for the team in Spain; team principal Bart Hayden telling RACER that the car should be a lot better at dealing with traffic at La Sarthe.

“When we ran at Le Mans last year, one of the things we found difficult was overtaking LMP2s on the straights,” he said. “We had almost too much downforce on the car. We wanted to get rid of downforce and gain some top speed. The test at Aragon looked to have delivered what we are hoping and expecting.

“I don’t think it will make too much difference in lap times, but over the course of a stint, the lap average will come down, as we should be able to get through traffic easier. With the original aero it was good through the Porsche Curves – on a clean run almost too good – so the drivers were ready to sacrifice that to have something a little more balanced.

“We won’t know until we go to Le Mans what we have, but we’re pleased with what we’ve seen so far.”

Toyota, meanwhile, is running the same low-downforce kit it ran here in Belgium last year – LMP1 Hybrids can only run two aero packages per season. The team arrives fresh from its own at 4,000km test at Paul Ricard with its full squad of drivers.

SMP Racing, though is running high-downforce aero kits on its AER-powered BR1s. Last year at Spa, in the first round of the ‘Super Season’, SMP raced with low-drag kits, while fellow BR1 team DragonSpeed utilized the high-downforce package.

However DragonSpeed will not be racing in Belgium this year; the U.S.-flagged team making a late withdrawal from the race weekend. Its Gibson-engined BR1 has yet to be fully repaired after the Sebring 1000 Miles. “We have not been able to acquire the electronics that needed fixing after our DNF,” the team said in a statement. But it will still have a presence in the LMP2 class with its ORECA 07 Gibson driven by Pastor Maldonado, Roberto Gonzalez and 2014 WEC champion Anthony Davidson.

ByKolles, meanwhile, returns to WEC action after missing Sebring, and with a new engine. Its CLM P1/01 will now race with Gibson power for the first time, after having previously used NISMO units. Driver Oliver Webb told RACER that after this weekend, the team will race with an entirely new chassis that’s “lighter, revised and optimized at the rear-end to better accommodate the Gibson engine.”

The team has tested with the Gibson prior to this weekend, Webb saying that it had a faultless run and is quietly confident about its chances of performing well both in Spa and at Le Mans. 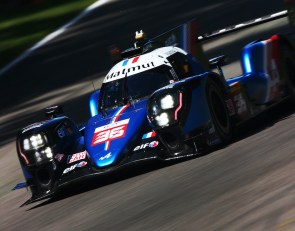