Self, 23, will have to participate in the NASCAR Road to Recovery program before being reinstated.

“AM Racing respects NASCAR’s decision and will follow their directions,” said a statement from AM Racing. “We expect Austin Wayne Self to return to the seat as quickly as possible. AM Racing will continue to operate as normal with a determination of a driver lineup set in the coming weeks. We expect to emerge from this challenge as a stronger team.”

Self raced the No. 22 in the first three races, but did not run Martinsville or Texas. Image by Thacker/LAT

Austin Wayne has 66 career starts in the Truck Series with five top-10 finishes and one top-five (Daytona 2017). While Self started the season by competing in the first three races, he did not run at Martinsville or Texas, where Darrell Wallace Jr. drove the No. 22 Chevrolet. 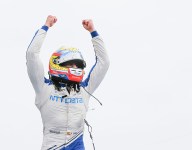