Gasly expects his relationship with Verstappen to help Red Bull

Gasly expects his relationship with Verstappen to help Red Bull

Pierre Gasly believes his “strong friendship” with Max Verstappen will benefit Red Bull when he steps up to the team next season.

Daniel Ricciardo’s shock decision to leave Red Bull for Renault led to Gasly being announced as the Australian’s replacement this week, moving up from Toro Rosso in 2019. While Ricciardo and Verstappen have been teammates for the past three seasons, there have been collisions between the pair — including this year in Baku. Gasly, however, expects his relationship with the Dutchman to be a strength for Red Bull.

“Being teammates and mates with Max next season is really cool, because we get on really well and we’ve known each other for a really long time,” Gasly (pictured at right above, with Verstappen) said.

“We used to race against each other in karting in 2010 as juniors, so we’ve already raced together, but not for the same team. We’ve actually had a couple of close battles — sometimes good for me, sometimes not so good, but we really enjoyed that time.

“We really respect each other a lot as drivers, but also as friends, so I’m really excited to join him in the team with him. As we have a strong friendship it will be only a positive for the team.”

Gasly leaves the garage in the Honda-powered Toro Rosso. (Image by Andy Hone/LAT)

Gasly sees similar benefit to his experience with Honda this year, as Toro Rosso has worked with the Japanese manufacturer as a works partner before Red Bull also makes the switch next season.

“Now next year Honda starts with Red Bull, making the switch with me — it’s like I follow them with their next steps, so it’s pretty cool.

“So for sure it’s beneficial and the experience of driving with them this year with their engine; I know their strengths, I know where they can improve, so for sure bringing that experience next year is always useful.” 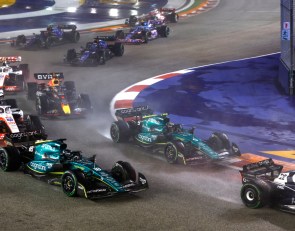