A tweet from Kyle Larson will come to fruition at Eldora Speedway.

Fox Sports is set to announce today the addition of Larson and Christopher Bell to its broadcast team for the Wednesday, July 18 Camping World Truck Series race at the half-mile dirt track. Larson will join Vince Welch and Michael Waltrip in the booth as an analyst. Bell will cover the infield and pits alongside Hermie Sadler and Kenny Wallace.

“[Larson] tweeted out wouldn’t it be cool to have like an all-dirt drivers only [broadcast] and the more I thought about it I said, you know what, that’s not a half bad idea,” Fox Sports Truck Series producer Mark Smith told RACER.

“I reached out to my bosses and tried to sell them on it, and once they thought it was a good idea I went to Kyle and said, ‘Hey, you kind of planted the seed, what do you think?’ I got him and Christopher Bell.”

“It’s going to be new and different and exciting for me to give it a try,” Larson told RACER. “Not having run the race last year and getting to watch it, I felt like the dirt fans would appreciate it a lot if there was actually dirt drivers that could commentate and teach the fans a little bit about what’s going on and what to look for and stuff like that. That’ll be a lot of fun, I think.”

Larson and Bell are former winners of the Eldora event, Bell scoring the victory in 2015 and Larson a year later in ’16. And both are highly touted talents who have scored numerous victories when it comes to dirt racing — which they still compete on whenever possible.

Eldora will be the broadcast debuts for Larson and Bell. But despite their being television rookies, producer Smith expects both drivers will able to draw on their experience. To that point, Larson and Bell mentioned their ability using “dirt language” to describe the action better.

“What to look for, what lines are changing, how to properly describe a slide job or properly describe the cushion,” said Larson. “I think there’s a lot of stuff that Bell and I could help the NASCAR fan realize. And like I said, the dirt fans that watch Eldora will have a better appreciation for the race if people they respect are commentating.”

Larson and Bell will be involved in all the broadcast activities, including qualifying, the qualifying races, the main race, and post-race.

“The biggest thing I want to get from them is their dirt knowledge, not to say my regular talent are lacking in it,” said Smith. “But us running on dirt with a big heavy truck, I don’t know if people realize it, but they’re not going that fast. Those guys are used to running 150 miles per hour in a winged sprint car, but these trucks are going, heck, only 60 or 70 miles per hour.

“What I’m trying to get from those guys is maybe bridge the gap to the dirt fan. Where these guys are watching or maybe the diehards are like, trucks on dirt is crazy. But somebody with the experience of Bell and Larson in both forms can bridge that gap to the diehard dirt fan.”

Fox has frequently used drivers in their race broadcasts recently. One Cup Series driver can be found joining the Xfinity Series broadcast each week, and twice now Fox has gone with the ‘Drivers Only’ concept where they fill out the entire booth and pit road roster with drivers. Last year it was done at Pocono, and earlier this year it happened at Talladega Superspeedway.

“I loved the Pocono broadcast, and it’s something I always wanted to do,” Bell told RACER of this opportunity. “It was like the perfect situation with it being Eldora.”

Preparation for next month’s race will be extensive by both drivers. Larson says he’s researching the field, sponsors, and backgrounds. He is also hoping to go into the booth this weekend at Chicagoland to observe the truck race.

Larson and Bell said they hope when the experience is over with they have done a good job.

“It’s going to be extremely difficult,” Bell said. “I was really excited about it when they originally brought it up to me but now the more that I start thinking about how it’s going to go, I’m starting to get pretty nervous. There’s a lot that I’ve got a lot to learn and I have a lot of research and homework to do going into that race because it’s going to be so new and foreign to me.

“I hope I get to drive race cars for a long time, but it would mean the world to me if I got invited back. So if I do a good job and they want me to come back and do another race or something else again at some point, then that’ll be a success and I’ll be really happy.”

If the broadcast is a success, Smith said he’d like to do it again next season and perhaps add another driverm such as a Ricky Stenhouse Jr. 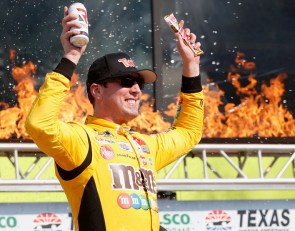