Karl Wittmer put on a tremendous battle with his Classic BMW teammate Matt Travis Saturday at Lime Rock Park to win the Touring Car Round 5 and veteran Johan Schwartz made it a BMW Sweep in Round 6 in the Pirelli World Challenge Grand Prix of Lime Rock powered by M.

Wittmer, the veteran from Montreal, entered the weekend just eight points out of the Touring Car lead and drove his No. 91 Classic BMW BMW M235iR Cup car to a close 1.24- second win over Travis in a great battle of Classic BMW partners in the first 40-minute TC feature Saturday. Third went to current point leader Vesko Kosarov, in the No. 3 Rearden Racing Missan 370Z TC Spec car.

The two BMW teammates could never shake each other during the 41-lap main event but enjoyed a big hug after the checkered flag for a spectacular duel.

“The race was great,” said Wittmer, who has finished in the top-five in each of the first six TC races. “I knew it was clean when I looked in my mirrors after Turn 4 and everybody got through, so from there it was a management race. The guys at Classic BMW gave me a good car, so all I had to do was put my head down and be consistent like a robot out there and just finish the race clean. Even then, you check your mirrors because it is Touring Car racing and you can get passed at any time. So you want to be consistent and hit your marks every lap.

“It’s a management game at this track because it’s so left-handed and one right-hand corner so you have to have the perfect setup. Luckily the guys at Classic BMW gave me the perfect setup and all I had to do was battle myself and try to keep Matt (Travis) in check. So the plan now that there isn’t a scratch on the car is, for race two, this is Touring Car so let’s have at it.”

“Everybody raced the start nice and clean, and my car was good for the rest of the race,” said Travis. “Thanks to my team for putting my car back together after the incident yesterday; it’s nice to be able to get second place for those guys. Karl (Wittmer) put on a great show; I did everything I could to try to catch him but had nothing for him.

“This is my first time here at Lime Rock. It’s a beautiful facility with a lot of history, but it’s also a challenging track — very different from everything I’ve driven. It’s been quite a learning curve, but the guys have done a great job setting up the car which helps a ton. With Karl right in front of me, I was just trying to hang on to him so if he made a mistake, I wanted to be there.”

In the second TC 40-minute contest, it was Schwartz, a VIR race winner, taking his Rooster Hall Racing/West Virginia University BMW M235iR Cup machine to a close victory over Jeff Ricca in his No. 78 GenRace Genesis Coupe, Travis and Wittmer.

“We didn’t come out of the box well on Friday here,” said Schwartz, the world record holder in a car drift. “We made some changes before the first race and I was able to grab the pole for race two. It wasn’t easy out there, but the victory always feels great. Now, two wins in 2018 so far is good start. The team did a tremendous job preparing the car for race two today.”

Touring Car Round 7 and 8 are set for Portland International Raceway on July 13-15. 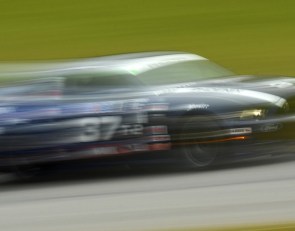 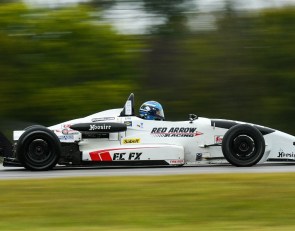