Red Bull team principal Christian Horner says his mechanics need “to work a miracle” in order to get Daniel Ricciardo’s car ready for qualifying for the Chinese Grand Prix.

Ricciardo slowed as smoke poured out the back of his car during FP3 in Shanghai, stopping on the exit of the penultimate corner and allowing marshals to push the car back to the pits. Red Bull finally got the car back to the garage with around two hours and 15 minutes before the start of qualifying, and Horner says it will be a big ask to replace the power unit before qualifying.

“Talking [with Helmut Marko] about what the plan of action is to get this car around,” Horner told Sky Sports. “Helmut was asking if we could book any penalties in advance, which unfortunately we cannot do. The boys have got to work a miracle to get that turned around for qualifying.”

Explaining what the issue appeared to be for Ricciardo, Horner said: “I think we’ve got a suspected turbo failure, that’s what the analysis is at the moment. 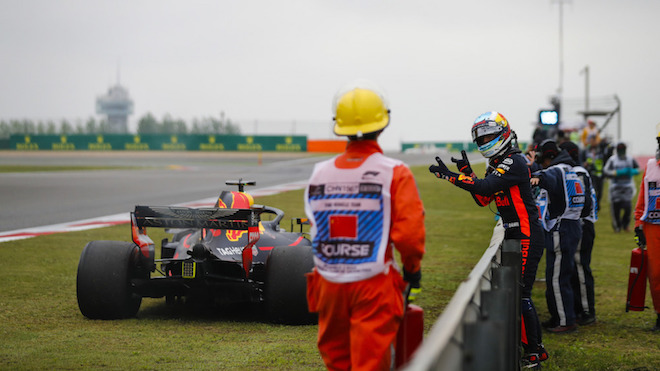 “Whether that’s damaged the combustion engine as well only time will tell. It certainly looks turbo orientated at the moment.

“I mean it’s the second race in a row. We had the energy store last race, we’ve got this issue before we’ve even got into qualifying here and we’re on race three so disappointed is probably an understatement.”

Asked if he will speak to Renault Sport managing director Cyril Abiteboul about the issue, Horner replied: “I think get all the facts first.

“Cyril is probably not the guy to be talking to on this one, it’s more of a technical issue. They’ll get the bits of shrapnel back, get the data and the bottom line now is it’s a big task to get it ready for qualifying.”

Red Bull wasn’t the only team making changes on Saturday, with both Renault drivers taking a new MGU-H ahead of FP3. Each driver is allowed three of that component for the season before incurring penalties.