Montoya turned in a track-record lap of 1m12.922s in the No. 6 Team Penske Acura ARX-05. Teammate Helio Castroneves put the Penske drivers 1-2 for much of the session with a 1m13.346s in the team’s No. 7 Acura, before being demoted to fourth in the closing minutes.

“In our last [practice] run we saw we could bring the tires up to temperature pretty quickly,” said Montoya, an open-wheel winner at Long Beach in 1999. “So I felt I could get a pretty good lap. I put three good laps together. I found places where I could go quicker, and I did everything else the same. So I did three laps in a row and it kept getting quicker. It was pretty good.

“For the race, we need to get a clean start and just manage the race. Acura and Team Penske is doing an amazing job. Honestly, this car reminds me the most of driving a Formula 1 car, with the balance and you can hustle the hell out of it. It’s fun.”

Montoya ran the fewest laps – eight – of any Prototype in the 15 minute session; the remaining Prototype competitors ran 11 or 12. 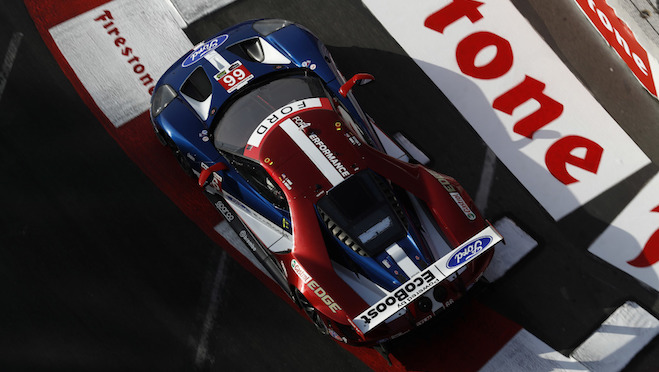 Joey Hand ran a track-record lap of 1m16.869s in the closing seconds to capture the GTLM pole in the No. 66 Chip Ganassi Racing Ford GT, stunning the Porsche GT Team drivers who had dominated the session.

“We made some last-minute changes before qualifying, and you’ve got to keep tuning and tuning,” Hand said after winning his fifth career pole. “It took until the last lap. I didn’t get a good one until then, with low fuel. I knew it was time to do it. I love being at Long Beach – I love being on pole. It’s a show, so I hope all the fans here and at home got a good one. It’s a pole, so I’ll take it.”

Laurens Vanthoor ran three consecutive quick laps early in the GTLM session, with his best 1m17.013s lap in the No. 912 Porsche 911 GT3 standing up nearly to the checkered flag. Teammate Patrick Pilet then worked his way up in the No. 911 Porsche, with his best lap at 1m17.263s.

Jan Magnussen took the outside of the second row in the No. 3 Corvette Racing Corvette C7.R, with a 1m17.293s, followed by teammate Oliver Gavin, who set a time of 1m17.533s.

Saturday’s 100-minute race will be the lone track time for the IMSA competitors, who will not have a morning warm-up session.