FIA safety delegate and race director Charlie Whiting has warned Haas he is not happy with flying bodywork after Romain Grosjean’s bargeboard fell off during the Bahrain Grand Prix.

Grosjean had damage to the left-hand side of his car on Sunday, with parts of the ornate bargeboard coming off at high speed on the pit straight. The team noted the damage at his pit stop and even removed some flailing items but Whiting says any parts that detach during the race “could do a lot of damage” if hit by another driver.

“One bit fell off; luckily it went onto the grass. A couple of more bits came off and on their third pit stop they removed another bit. It’s not very satisfactory to be quite honest and I think we really need to make sure all these things are well attached, as there’s so many of them. I mean, some of the stuff that comes off, even if it’s not very big could do a lot of damage.” 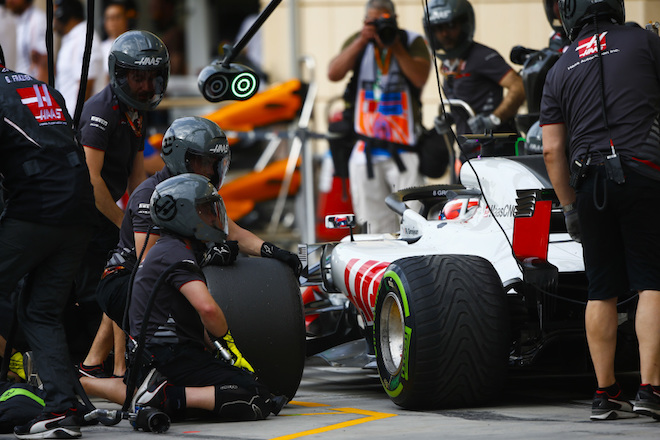 Whiting added the FIA will also be looking into wheel gun technology after pit stop issues for Ferrari and Haas in the opening two races, which he admits are “looking like less and less like a coincidence.”

Asked if the wheel guns will be investigated from a technical perspective, Whiting replied: “Absolutely. [Fernando] Alonso lost a wheel in testing and we went through it all with McLaren, they gave us a report in the week. We discussed it with the technical working group to understand it all, to make sure everybody else realizes these things can happen, everyone tries to learn from them.

Explaining the outcome of that investigation, Whiting says most teams insist their designs would not allow a repeat of the McLaren incident.

“What actually happened was that the design of the nose piece that goes into the axle, that is the thing that holds the two-stage retention mechanism, but the way that is fixed into the axle was not quite strong enough so the wheel was a little bit loose – it worked itself loose because it had done four laps prior to that.

“So when the wheel started to tip a little bit, it put abnormal loads into the things that were holding the nose in and once the nose came out, there was no retention, so a lesson to be learned there.

“That was shared with everyone in the technical working group so that they can all look at that and make sure their designs aren’t similar. Of course they said, ‘Ours won’t do that.'”

Trans Am 0hr ago ET