Newgarden credits team on pass for the win

Newgarden credits team on pass for the win

After a quiet start to his title defense in St. Petersburg, where he finished seventh, Josef Newgarden zoomed back to the top of the Verizon IndyCar Series points table in the same manner with which he took charge late last year. His dramatic late pass of Robert Wickens for the win at ISM Raceway on Saturday night was reminiscent of the similarly forceful move he put on Simon Pagenaud to win at Gateway last August.

Newgarden though, credited his Penske crew with putting him in position to make his latest winning pass at the final restart.

“Yeah, I think it was a team win tonight. I don’t know that I deserved to win the race tonight, but I think the team did,” Newgarden said. “They did a really good job on strategy, pit stops were unbelievable. I think I gained like five or six positions on just the first stop, which was awesome. They did a great job.” 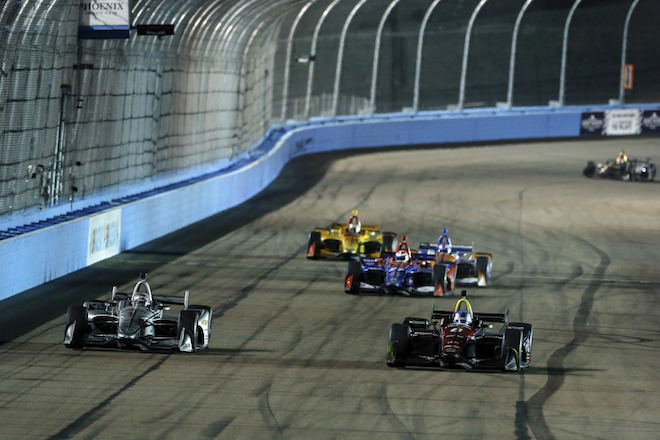 The choice to put Newgarden on fresh tires for the final shootout also proved a decisive advantage, although he admitted he hadn’t been convinced at the time.

“Honestly, I didn’t know if that was the right call. I felt like we finally got our car where we needed to be on the final stint,” he admitted. “I don’t want to question Tim [Cindric, team boss]. The team doesn’t normally let me down. Whatever they say to do, I’m always going to do it.

“I had 50-lap newer tires. With that, with how much he [Wickens] had to check up in T1, he gave me just enough room. I didn’t have to get crazy high. That [winning pass] I definitely took risks. I think sometimes you have to do that in the right position, and I think it was the right time to do it tonight.

“I think we were a top-five car – I struggled a little bit with the balance. So it was difficult for me to force the issue until we got to the end when I had a tire advantage. I kind of bided my time for that.”

While satisfied overall with the performance of the 2018 aero package at Phoenix, Newgarden admitted that it passing either lapped traffic or for position again proved problematic.

“Yeah, it was definitely a very challenging race to find what you needed from the car. You did have moments where you got stuck. For me, I couldn’t attack as much as I wanted to. I had top-five speed, but my attacking ability was low. I wasn’t really able to do much.

“It felt like it turned into a track position race. I think that’s what hurt us on the second pit stop. We pitted way too late. We sort of figured that out. Then we pitted early, won the track position game at the end.

“But I hope it was a good race. I hope people enjoyed it. It was challenging from the driver’s seat, no doubt. If that translated to TV, to the audience, I don’t know.”