Memories of Jimmy at the Brickyard

Memories of Jimmy at the Brickyard

Fifty years ago the unfathomable happened in Hockenheim, Germany when Jimmy Clark lost his life in a Formula 2 race. It shocked the entire racing world – not just in Formula 1 – because the Flying Scot had also left a most impressive mark at the Indianapolis Motor Speedway.

In five starts, he led four races for 298 laps and came close to scoring three wins instead of his lone triumph in 1965. But earning the respect of USAC’s oval-track stars ranked right up there with the drinking the milk in Victory Lane.

“I wasn’t real found of the Brits in general but I liked Clark,” said A.J. Foyt. “He drove hard but clean and I had a lot of respect for him because he raced at Milwaukee and Trenton too.

“When I knocked him off the pole in ’65 and said over the PA that I brought the record back to the USA I got a big ovation but Clark came down and shook my hand and I thought that was pretty damn nice.”

Beginning with his rookie run in 1963, when he finished second to Parnelli Jones, Clark was always a factor except his final start in 1967.

“I never gave those F1 guys a lot of respect and neither did A.J. because we were the rough, tough bullies and they were those polite road racers with funny accents that thought they were better than everyone else,” said Jones.

“But Jimmy was different, he was a real nice guy and he caught on to oval racing pretty quick. We were impressed because he was a helluva talent.”

Dan Gurney persuaded Lotus’ boss Colin Chapman, Ford and his rival/pal Clark to try Indy in 1963 and the rear-engine revolution was off and running.

“I think no matter who you are the first time you go there it’s a pretty daunting situation and, initially, Jimmy wasn’t sure and it took a while for him to get dialed in,” said Gurney back in 2014 about his Lotus teammate in 1963 [below] and ’64. 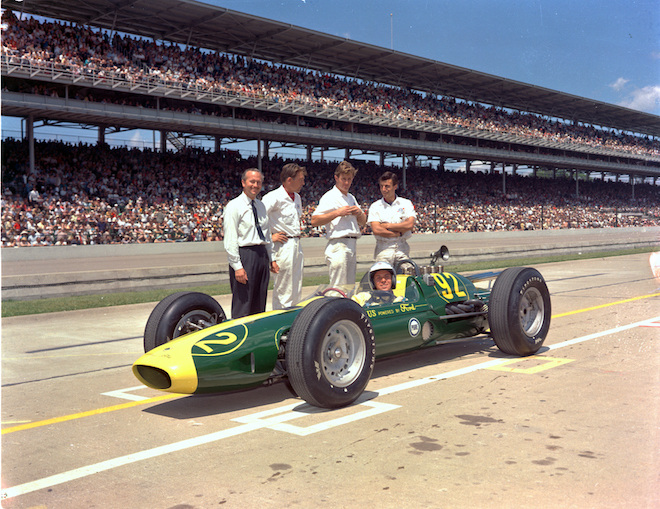 “But he loved to race and he wasn’t worried about protecting his reputation, he liked a challenge, and if he drove a car that wasn’t good, he made it look good.

“Indy also offered him a chance to make five or six times the money he could in Formula 1, so that was part of the allure.”

But turning left for three hours at sustained speeds in between walls was as foreign to Clark, Graham Hill, Jack Brabham and Jackie Stewart as a breaded tenderloin out of West 16th Street.

“I think Jim’s style, smooth, clean and gentle was a good fit for Indianapolis,” said Stewart, who embarked on Indy in 1966 and came within 10 laps of winning as a rookie. “He laid the groundwork for us F1 guys coming to Indianapolis and showed it could be done.”

Gurney countered that theory. “People always said he was so smooth but Jimmy ran it on the edge and extracted the maximum out of the car,” he said. “He was an edge man and his tail was out a lot of the time. And he wasn’t so calculating, he was a hell-bent-for-election kind of guy. And if you were a spectator, you couldn’t take your eyes off him.”

In ’63, Clark led 29 laps and finished 33 seconds behind Jones in a race cloaked in controversy because of the oil leak in Old Calhoun that nearly got Rufus black-flagged. The runner-up showed no ill-will, and congratulated Parnelli afterward.

The following May he captured the pole position and led early before suspension failure KO’d him, but in 1965 he was in another time zone. He led 190 of the 200 laps, and beat Jones to the checkered flag by almost two minutes.

In 1966, he fought and ill-handling car and spun twice without making any wall contact but still led 66 laps and was pulling into Victory Lane when he noticed Hill (who he’d lapped once) was already there. Chapman considered protesting and figured USAC simply missed scoring Clark a lap but many people thought the wrong driver was given the win.

The following year, Clark started 16th in a year-old car and was never in the hunt for the first time; retiring with a burned piston.

In the spring of 1968 he tested the new wedge Lotus 56 for Andy Granatelli at IMS [below], just a couple of weeks before his death.

“Jimmy was enthused after driving it,” recalls Jones, who was in attendance that day. “He thought it had a lot of potential and he was excited about coming back in May.

“And that was the last time we ever saw him.” 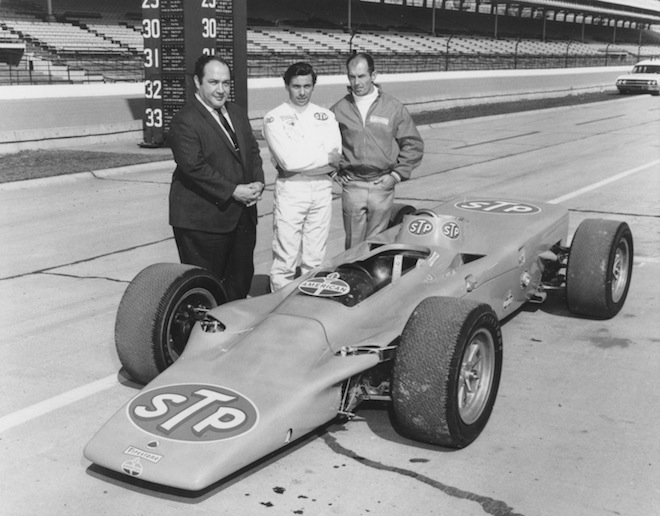