Tracy's Trans Am run could lead to wider racing return

Tracy's Trans Am run could lead to wider racing return

Paul Tracy’s first practice sessions in a Trans Am car at Road Atlanta on Thursday helped the Indy car champion take his first steps toward answering an important question.

Seven years removed from his last professional race, the 2003 Champ Car title winner has become a fan favorite as part of NBCSN’s broadcast team, but the Canadian has also been curious to see if his one-off return in the No. 87 3-Dimensional Services Chevrolet Camaro will renew a passion for driving.

“This is just an exercise for me to find out if I want to do this again,” he told RACER moments after climbing out of his V8-powered behemoth. “I stopped racing after Dan [Wheldon] died [at Las Vegas] in 2011; that was my last IndyCar race, and I didn’t really want to stop, but I had a lot of people pressuring me then – my mom, my dad, my wife at the time – because I was involved in Dan’s accident and it was scary. But I was conflicted.”

PT’s focused on commentary and business interests since that fateful day on the Las Vegas oval. Spirited interaction with his NBCSN colleague Townsend Bell – also a former IndyCar driver who turned to sports cars as a second career chapter – led to testing the waters in Trans Am.

“All I’d done from the time I was five years old to 2011 was racing,” he continued. “So, I had a hard transition of figuring out what to do until the NBCSN deal came along. I knew it was time to stop racing Indy cars, but I thought maybe I’d go onto driving something else. But everything stopped altogether. So, as time went on, that went away, I didn’t think about driving much, and then this deal came along.

“Townsend said if I got my silver [driver rating from the FIA], he’d take me to Le Mans with him, and I think he was just pulling my leg, so I put it out there on social media that I was coming out of retirement. And a week later, Tony Parella from Trans Am called and said he’d put me in a car to see if I wanted to do it again. So here we are.”

Beyond a few appearances in Parella’s SVRA vintage racing series (pictured below), Tracy has been out of the cockpit for most of the decade. 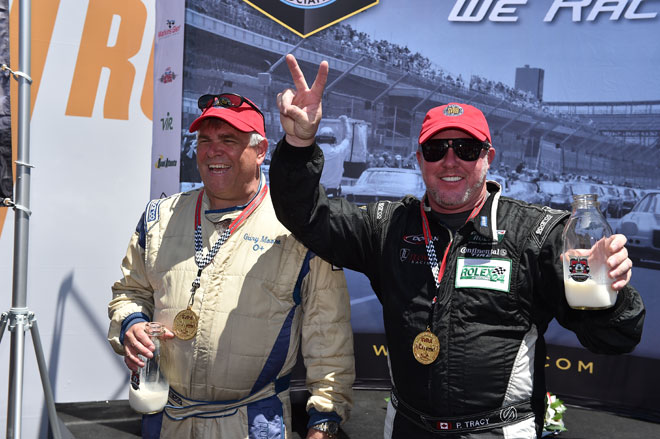 “I did a go-kart event last week; it was an indoor event, and other than that, I really haven’t driven anything other than a vintage Mustang for 20 minutes the last two years at the Brickyard with the SVRA,” he said. “Last year, I did three laps of practice, got in the race, and literally ran 20 minutes. I’m really rusty.”

At 49, and due to the last-minute invitation, Tracy is trying to jump start his instincts with almost no preparation time involved.

“Man, I’m really out of shape for driving,” he added. “I’m holding my breath. Hanging on, really tense. I’m sure I’ll relax. I’m really amped up and need to slow down. The balance of the Trans Am car is pretty good. I still need to learn where I’m going here, though. The last time I drove here was 1985 in the SCCA Runoffs in a Formula Ford…”

Once he’s done racing at Road Atlanta, PT will head to Phoenix to call the first IndyCar round of the year on NBCSN. The answer to the larger question he’s after will come at some point in the days and weeks ahead.

“It’s an exercise in seeing if this is something I want to pursue again,” he said. “Or does it close the driving chapter for me? I don’t know yet.”