What’s different about the new Aston Martin Vantage GTE that has been developed hand-in-hand with Aston Martin Lagonda?

Well – almost everything, according to Adam Phelps, the head of chassis development, as he and several key members of the AMR design and engineering team offered further insight into the tech behind the new car during RACER‘s recent visit to Prodrive, which has run Aston Martin’s factory and customer racing operation since 2004.

“This is a brand-new car; there’s no real carry-over parts, just a few nuts and bolts maybe,” he said.

“Structurally, it’s been straightforward, nothing has gone wrong. There’s been little niggles, but nothing has fallen off or been disastrous. And that gives the performance engineers a good chance to get the most out of the car in testing.

“We started from a CFD base and tried a lot of things with the structure to allow the aero to take its direction. This was a different process to the old car, because we were just building off what was already there with the original road car.”

As far as the chassis goes, the development of the road car and racecar went hand in hand. The end product on the racing side was rigid and reliable out of the box. The design and development phases, however, weren’t without their challenges.

“When you work with a manufacturer like Aston Martin, it’s a benefit, as we’re not making huge volumes of cars,” said Warren Jones, AMR’s partnership manager. “That means we can make changes in the design quite quickly, and when you have small teams working together, it’s quicker than going through lots of other processes.

“There was a small issue where we were trying to fit some intercoolers into the car for instance, and we needed to make the car longer to put the intercoolers in at the right angle to get the actual performance to cool them. We knew because the communication was so clear, that that part of the car hadn’t been finalized.

“So we did actually change that.”

AMR admitted that in today’s world of sports car racing, cars’ serviceability isn’t quite as important as reliability and speed – because races of attrition are now few and far between. Ensuring that the new car can be repaired quickly is still key.

When RACER caught a glimpse of Vantage GTE Chassis No.4 (below) in the first stages of its build in the workshop, AMR team principal Paul Howarth pointed out that the new car has improved dramatically in the serviceability department. 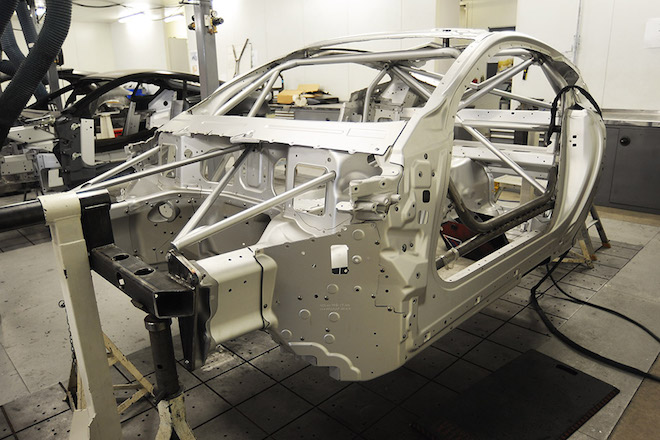 Should the car be destroyed on a race weekend, and reduced to its chassis and roll cage, AMR believes that a six-person team could completely rebuild the car in 10 to 15 hours in the back of the garage. And that is a very impressive statistic.

In CFD terms, the Vantage GTE has been in development for over a year and a half. Patrick Bandeira, one of AMR’s data and simulation engineers, explained to RACER that the long lead time for this project has been a big plus for the team.

“The philosophy of the car has changed massively, and that’s a result of the approach change from the organizers,” he said. “We have a much more intricate BoP process now. They look at everything. And on the old car we had a low drag philosophy, and now we are able to produce a car with significantly higher levels of downforce, with just a little more drag.”

Open dialogue with Aston Martin Lagonda meant AMR’s CFD work proved effective, as the small teams who worked on aero advancements and the nuances of the car’s design pushed hard to create a car perfectly suited to the GTE regulations, and the desired philosophy.

“It was all done in-house, the CFD work that is,” Bandeira said. “We’ve got a very small group, myself and two designers that were involved in the surfacing and aero design of the car.

“There were a few surprises, but the big challenges were on the aero side; we wanted to push it. And we felt comfortable because we had the experience with the old car, so in analogy terms, if we at AMR are a band, this was like our second album. We improved our methodology.” 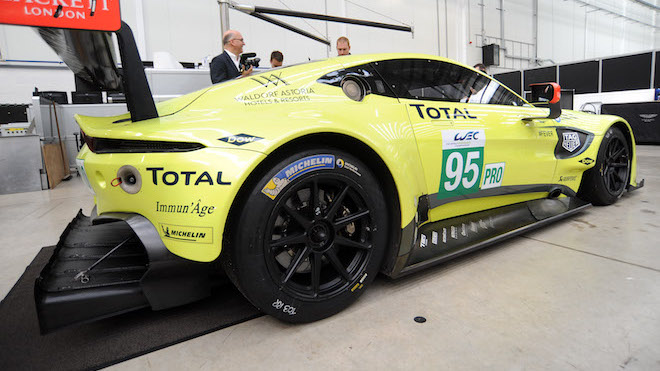 An intense amount work went into the smallest of aspects of the car, Bandeira stressed – but some of those pieces didn’t even make it onto the car.

“The biggest example of how much work went on small areas of this car was the dive planes. We spent a lot of time on it, and as you can see it doesn’t even have any,” he explained. “We must have done over 50 versions of them, and because the way the previous car reacted due to the floor geometry, and the way the wheel arch interacted with anything, we tried it.

“But with this car it wasn’t as effective, because of how different the wheel arches are. So we worked on side fencing, and tried 20 or 30 options.”

On the engine front, Aston Martin has taken a different approach. Gone is the naturally aspirated V8 from the outgoing car; in is a new supplier – Mercedes – and a 4.0-liter turbocharged V8 as the chosen product.

“Packaging the turbo engine was a real challenge,” said Arthur Shaw, AMR’s chief engine engineer. “Mainly because of the cooling. The base engine is a good engine, it’s nicely laid out. In terms of thermal efficiency, it’s quite good, but there’s still a whole lot of engine to fit in such a small sub frame.

“We’ve had to work with our electronics partner to develop a racing ECU because the injectors run at 200 plus volts; there’s some very interesting tech there.

“In terms of water cooling it’s a step forward for us, too. And in terms of heat projection into the radiator, it’s better than the old car. We’ve got a separate oil cooler on the car, in the front, whereas the old car had one on the back where the oil tank is. But in this car we’ve made it simpler.

“In terms of radiated heat, the heat mass is at the top of the engine. We’ve just had to do well with coating it, and we’ve managed to get the temperature to drop massively. We’re pleased with how cool we’ve got it. You can see that any parts of the engine that aren’t heat shielded, and they’re cherry red. But the special coating around the engine bay have been great.”

Once the engines leave Stuttgart, they’re developed by Aston Martin Racing alone to make them suitable for racing.

“Mercedes give Aston Martin the engine, and Aston Martin give us the engines from the production line and we turn it into the racing engine. It’s our engine because of that; they aren’t involved at all,” Shaw said.

“We’ve got four design engineers and four development engineers and 11 engine builders. We currently have the engine department based in Northampton because when Prodrive moved buildings, it didn’t move the engine build department. That’s because we haven’t re-instated the dyno facility. We’re in the process of bringing that back in-house, which should be completed by early next year.

“Reliability-wise we’re confident after testing the new engine. We’ve done 60 hours on our main test engine, well over 12,000 kilometers (about 7,500 miles) at full race speeds at full race temperatures. Barring anything unexpected, we should be fine.”

Outside of the main components which take up the majority of AMR’s team and tires, there’s been plenty of new partnerships and existing partnerships to manage for the car’s more intricate areas.

One of those is Swedish suspension supplier Ohlins, which has partnered with Aston Martin to ensure that it gets not only personalized service, but also bespoke products.

“We moved to Ohlins, who are happy to work with us and design what we want to get the most out of the packaging,” said Phelps. “Other companies don’t have the resources to do that.”

It’s the same with the car’s gearbox and brakes.

Alcon is AMR’s new brake supplier. The new calipers are much stiffer, wider and totally bespoke. It gives a harder pedal feel, making it a lot more positive, giving drivers a lot more confidence and the ability to brake later.

The car’s new gearbox, from Xtrac, is far more refined than that of the older Vantage; it’s more compact (narrower but a bit taller), allowing the weight to be kept in a smaller area.

On the previous Vantage’s gearbox the ratios were mounted on the front, making it long and more difficult to package. The new one is a very different shape; the ratios on the side make the gearbox taller, ensuring the driveshaft is perfectly level.

“There’s so many little changes to this car, like electric steering, electric gearing, electric waste-gate control,” said Shaw. “Every area is up to date and advanced now. The old car feels very analog, while this one feels digital.

“It’s all come together, and what we have is a program with longevity and that’s got a lot of exposure.

Click on the thumbnails below for more images of the Aston Martin Racing factory tour.