The R. Ferri Motorsport Ferrari 488 GT3, driven by Toni Vilander and Miguel Molina, returned to victory lane Saturday at Circuit of The Americas (COTA) in the Round 1 60-minute GT SprintX event as part of the Pirelli World Challenge Grand Prix of Texas.

The victory was bittersweet for team owner Remo Ferri, who lost his father and his brother in the past month, and he returned to the PWC victory lane for the first time since 2015.

The last R. Ferri Motorsport win in Pirelli World Challenge was at Long Beach in 2015 with Olivier Beretta driving.

On Saturday, Vilander started third with pole winner Mike Skeen and front-row starter Alvaro Parente battling for the lead into Turn 1. Vilander slid to second early in the 60-minute, two-driver race and pressured Skeen until the pit stop window opened at the 25-minute mark.

Vilander handed the popular R. Ferri Motorsport Ferrari 488 GT3 to Molina, who took the lead out of the pits and crossed the finish line 5.559 seconds ahead of the No. 2 CRP Racing Mercedes-AMG GT3 of Daniel Morad and newcomer Fabian Schiller. Skeen and his teammate Scott Heckert rounded out the GT SprintX Pro-Pro podium Saturday at COTA.

“This was my first race with Miguel but he has a lot of experience with the Ferrari in the Blancpain Series in Europe,” said Vilander. “We had a great pit stop and that helped us gain the advantage. We practice the driver change a lot. His input on the car and the various information we received was a big help too. We were aiming at that minimum time in the pits. Miguel pulled out of the pits with the lead and he did a great job extending the lead to the checkered flag. 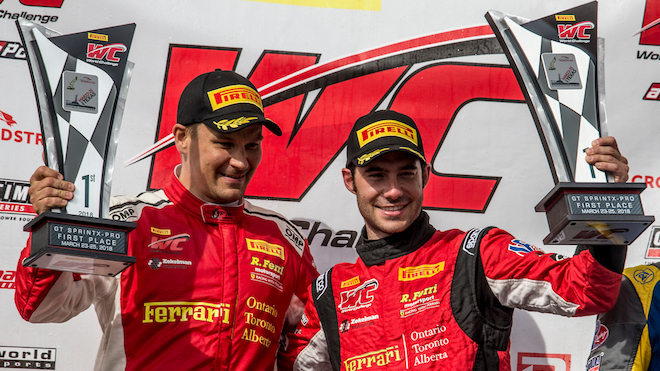 “The past few weeks has been stressful on Remo with his family situation and my crash at St. Pete. The team is really professional and gives us a great car.”

“I was able to build a gap after the pit stop and I held the lead at that point,” said Molina. “This win is very good for the team especially what has happened in the past week and month to the family. I want to thank Ferrari R. Ferri Motorsport for this opportunity to race with the team. This is my first time teaming with Toni and my second season as a factory Ferrari driver. So, winning today was very special for me.” 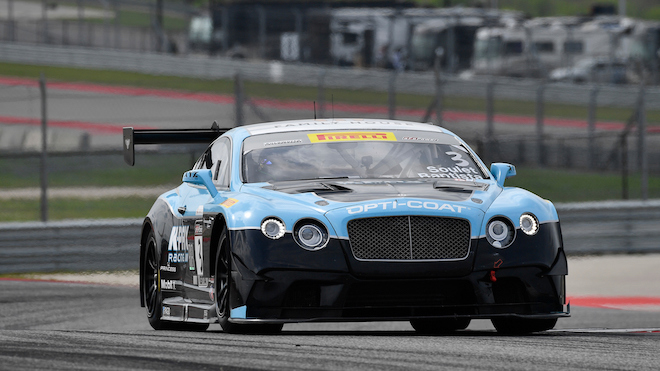 In the Pro-Am division, young Rodrigo Baptista teamed with Maxime Soulet in the No. 3 K-PAX Racing Bentley Continental GT3 to capture the class over the pair of Wei Lu and Jeff Segal in the No. 31 TR3 Racing Ferrari 488 GT3 and the duo of Yuki Harata and Alessandro Bressan in the No. 55 Dream Racing Motorsport Lamborgini Huracan GT3.

Scoring the victory in the Am-Am class at COTA Saturday was former GTA champion Martin Fuentes and Caesar Bacarella in the No. 07 Squadra Corse Garage Italia Ferrari 488 GT3 over the solo drive by David Askew in the No. 63 DXDT Racing Mercedes-AMG GT3.