Reigning GT SprintX Pro-Am champion James Sofronas teamed with Alex Welch to capture Sunday’s Round 2 GTS SprintX 60-minute feature in the No. 14 GMG Racing Audi R8 LMS in the Pirelli World Challenge Grand Prix of Texas at the Circuit of The Americas.

Sofronas started eighth in the 37-car field Sunday and moved to the third spot by the second lap of the 21-lap main event at the 3.427-mile, 20-turn road course southeast of Austin.

Welch took over the driver’s seat on a Lap 12 pit stop and sat third when a full course yellow appeared on Lap 14. The Colorado racer then moved past leader Samantha Tan and second place Justin Raphael, both in BMW M4 GT4 cars, at Lap 18.

Welch opened up his advantage to 1.5 seconds immediately and took the checkered flag under another full course caution period.

The win for Sofronas and the Southern California-based GMG Racing team was the fourth in the last four COTA races, including three Pro-Am victories last September.

“In the start, we were a little farther back than I would have liked,” said Sofronas. “But, under the conditions, I was really grinding on the brakes and tires on those two warm-up laps. I think that gave me a little bit of an edge to get aggressive on the brakes and push on corner entry. That allowed me to make a few passes. That’s where the strengths of the Audi lie, in the brakes and in being a nice balanced car. I want to thank the Audi Sport group who were here this weekend. It’s a great support crew that gives the Audi customers tremendous assistance at every race.”

“James let me know about who I was racing when I jumped in the car – some of them I knew and some of them I didn’t,” said Welch. “I knew where our car was strong, and that’s on the brakes, We don’t have the straight-line speed that the BMWs and some of the others do. I had a good run coming out of the carousel. I got on the throttle very early and got a little further to the inside than I usually do, but it was purely because I had a run and I had to carry and keep my speed. I went ahead for the pass for the lead. It was definitely the key pass. The racing competition is intense in SprintX with the GT4 cars.”

Second overall went to the early race leaders, Stevan McAleer and Justin Raphael in the No. 17 Raphael & Associates/Classic BMW BMW M4 GT4 followed by the No. 38 ST Racing BMW M4 GT4 of Tan and race polesitter Nick Wittmer. Rounding out the top five were Harry Gottsacker, Round 1 pole winner, in the No. 69 Racers Edge Motorsports SIN R1 GT4 and the No. 78 Compass Racing McLaren 570S with Ray Mason and 2017 TC champion Paul Holton. 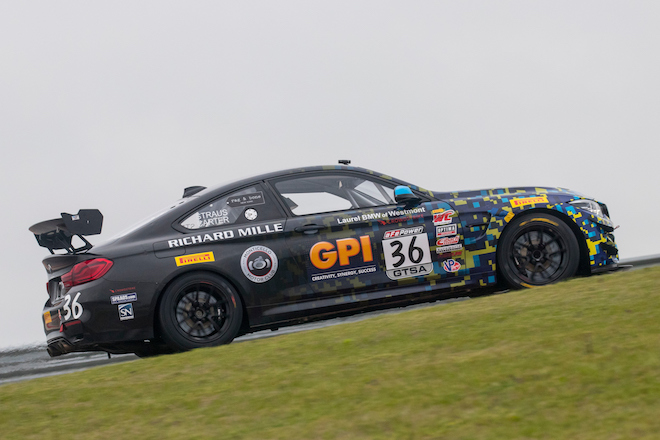 In the Am-Am division the No. 36 ST Racing BMW M4 GT4 of 19-year-old Aurora Straus and veteran Al Carter won the category Sunday. The duo held off the solo driver Drew Staveley in the No. 12 Ian Lacy Racing Ginetta G55 and the Classic BMW duo of Toby Grahovec and Chris Ohmacht in the No. 92 EFT Global BMW M4 GT4.

“I was flat out in the first 20 seconds and the car did pretty much everything I wanted it to,” said Straus, the Harvard-bound racer in her first GTS SprintX event. “It was going to be a pretty good race from the get-go. I had a car spin right in front of me and I was able to avoid it. The ST Racing BMW was outstanding today. It’s great to win our class in our first GTS SprintX race.”

“The first two laps were a touch slick because the track was damp,” said Carter. “But by the second lap, we were pretty much driving full out. It took a little bit of patience to figure out how much speed you could use to roll through the high-speed stuff and not end up in Houston, but that’s what we did. The car felt good, the tires got up to temperature and then it was race-pace and let’s go.”

The Pirelli World Challenge GTS SprintX Rounds 3 and 4 now move to Virginia International Raceway on April 27-29. The next PWC event will be a GT/GTS event in the streets of Long Beach, Calif., April 13-15.