With the first race for Aston Martin Racing’s new Vantage GTE fast approaching, the team is full of confidence in the new car’s ability to be in the mix straight away.

The new Vantage GTE replaces the outgoing model, which won Le Mans last year in its 13th year of competition, and is a big part of the brand’s current push to continue winning at a high level in sports car racing.

During the off-season, AMR has embarked on what it considers its “most comprehensive” testing program ever, the team racking up over 12 thousand miles  of running thus far. Four of the new cars exist, one a dedicated show car, another still in the early stages of its build at Prodrive in Banbury, and the other two test cars – one of them a full mule with most of that mileage under its belt.

The team has been surprised by the car’s pace out of the box, as well as its reliability. Longtime AMR factory driver Darren Turner explained to RACER that the car was so impressive early on, Aston Martin was able to embark on endurance tests earlier than planned.

“[AMR director] John Gaw gave me the chance to be first to drive this one. [The first shakedown] was only a straight-line test at Turweston Airfield, but it’s a place we go to on a regular basis. I have a good understanding of what a car should feel like there, and when we took the new car out, I knew that it felt a big step forward, just in acceleration and braking.

“It was quick out of the box, and again on all aspects felt better than the older car. After more laps and test, you hone in on the detail, and it could be for 20 laps you don’t notice any issues, then when the car gets lighter and the tires wear out you notice different tiny things. Now, 20,000 kilometers in, the car’s development is all about reliability, and fine tuning the car’s setup. 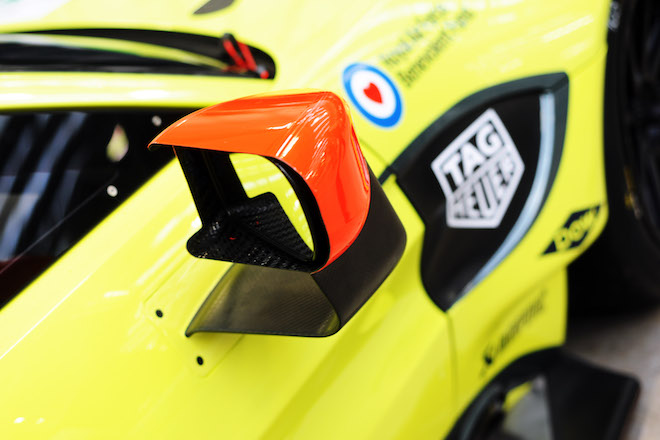 “I think everyone has been very surprised,” he continued. “The first endurance test came earlier than everyone expected. The first time anyone was expecting to think about long testing was December, but we were out in October. And we did it because we were turning up to test days with a kilometre target, and meeting them by lunchtime.

“When you’re doing that early on, you get encouraged and you start getting big tests under your belt. The team here at Banbury had a bit more lead time with this than other projects, so they had a lot more time to get into the detail. There haven’t been any big surprises.”

With there being limited flexibility in the regulations for GTE cars when it comes to running different aero configurations, a manufacturer has to design its car to be competitive on both high and low downforce circuits. Turner was keen to stress that the car in its low-downforce setup has been strong in testing, which bodes well for Le Mans, the most important race of the year.

“I wasn’t at the low-downforce test that the team completed at Aragon recently, but I’ve heard that the balance in the car was the same, which is key, and extremely important,” he said.

“You want a car fast in a straight line, and stable through the corners. You want a GTE car to run well at the sprint circuits, and at Le Mans, and feel similar in both high and low downforce set ups.”

Another key part of AMR’s test program has been developing a tire for the car with its new partner, Michelin. The past two seasons, Aston Martin has been racing with Dunlop, but for this year, the brand has reverted back to Michelin, in order to be consistent with its road car partnership.

The key difference this time around, is that AMR has the opportunity to develop a specific compound with Michelin, as it did with Dunlop. Previously, AMR had been a customer of Michelin, not a partner, and therefore was just purchasing customer tires, not developed for the Vantage.

“Being on Michelin levels out the class, meaning there’s no advantage or disadvantage,” Howarth said to RACER. “(Michelin has) been great – they have good energy, and have in-depth technical support which is at the highest level. What tire programs the other marques are running with them, I don’t know. The true answer when we see all the marques on the same circuit and we can compare tire degradation.

“We were a customer last time; they gave us a customer tire. This time we are on a full development program with Michelin, and it’s what you should do at this level. It’s the same as how we were with Dunlop really. This partnership gives us a lot of data and understanding, it validates our approach.”

Before heading to the Prologue at Paul Ricard next month, AMR will test at Spa-Francorchamps, where the team hopes to get some wet running in. Then, at the Prologue itself, AMR will run one of its two Vantages for the full 30 hours, adding yet another big endurance test to the car’s pre-season program.

“I want to go to Spa to test, because I want it to be wet, I want to get the drivers confident in the wet. You need it for confidence building. It’s going to be short sessions, we won’t be doing long runs. It’s about conditioning.

“We’re going to Spa to race, too, and it could make a big difference in the championship to do well there. So why not test there too?

“I can’t say if I’d want to do any more testing to be honest after that. I can’t say I’m over-confident, but we’ve done so much.”

Looking ahead to the season opener, Howarth hopes that the team will be competitive off the bat, and capable of challenging both the established cars in the field from Ford, Ferrari and Porsche, as well as BMW’s new challenger, in what will be its WEC debut too.