Van Overbeek took over for Pipo Derani in the No. 22 Nissan Onroak DPi, but the team’s once-comfortable lead was quickly challenged by van der Zande, driving the No. 10 Konica Minolta Cadillac DPi-V.R.

With five hours remaining, Eric Curran was third in the No. 31 Whelen Engineering Cadillac followed by Juan Pablo Montoya in the No. 6 Team Penske Acura ARX-07.

Spencer Pigot led for three circuits during the round of green-flag stops, although he had an off-course excursion on his final lap before pitting in the No. 55 Team Joest Mazda RT-24-P. He turned the car over to Harry Tincknell, who rejoined the race in seventh. Moments early, teammate Oliver Jarvis turned the fastest lap of the race – a record 1m49.002s – in the No. 77 Mazda, although that car had spent time behind the wall for brake work.

Racing went back to green at the beginning of the seventh hour, but almost immediately went back to yellow for a pair of incidents involving three of the leaders.
In a battle for fifth place between Action Express Racing teammates, Christian Fittipaldi shut the door on Filipe Nasr in the No. 31 Whelen Engineering Cadillac DPi-V.R, sending the No. 5 Mustang Sampling Cadillac spinning. Fittipaldi continued, but fell to eighth.

Moments later, Ricky Taylor suddenly slowed while running second in the No. 7 Team Penske Acura ARX-05. Taylor pulled off course, and exited the car following a brief exhaust fire, which brought out the yellow. With the blaze quickly extinguished, Taylor got back in but was unable to restart. 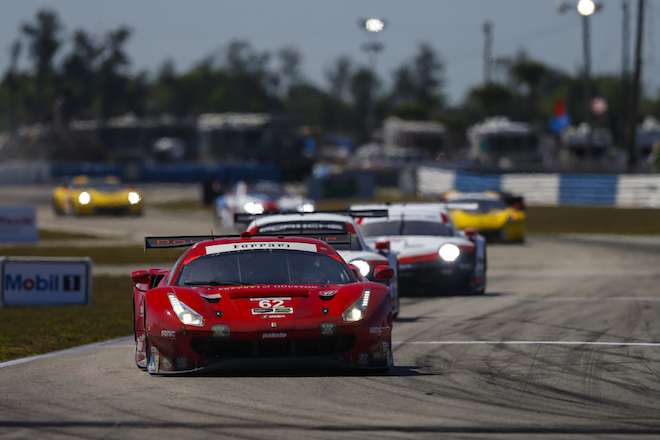 The hour featured heated multi-car racing in GTLM. Alessandro Pier Guidi led the class in the No. 62 Risi Competizione Ferrari 488 GTE, followed by Richard Westbrook in the No. 67 Chip Ganassi Racing Ford GT and Frederik Makowiecki in the No. 911 Porsche 911 RSR.

In GTD, Corey Lewis leads in the No. 48 Paul Miller Racing Lamborghini Hurcan GT3, followed by the two Michael Shank Racing Acuras of Katherine Legge (No. 86) and Mario Farnbacher (No. 93). Luca Stolz led much of the hour in the No. 33 Riley Motorsports Mercedes-AMG GT3 before pitting and turning the car over to Jeroen Bleekemolen.