Ricky Taylor held the lead one hour into Saturday’s 66th Mobil 1 Twelve Hours of Sebring, with the opening 60 minutes including a scary flip in a two-car incident in Turn 17 20 minutes into the race, while contenders from each of the three classes were involved in separate incidents on the opening lap.

Taylor took the lead in the No. 7 Team Penske Acura ARX-05 during pit stops under caution. He was followed by Felipe Nasr in the No. 31 Whelen Engineering Cadillac DPi-V.R and Pipo Derani in the No. 22 Tequila Patron ESM Nissan Onroak DPi. The trio held positions for the remainder of the hour.

Jesse Krohn had led all the way in GTLM in the No. 24 Team RLL BMW M8 GTLM, chased by the Chip Ganassi Racing Ford GTs of Richard Westbrook (No. 67) and Joey Hand (No. 66). 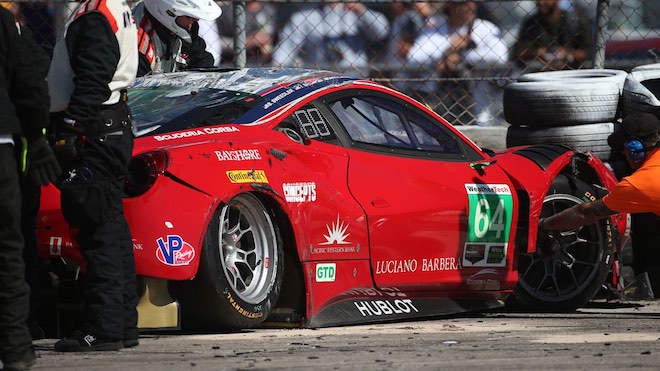 The caution waved 20 minutes into the race when Sebastian Saavedra, driving the No. 52 AFS/PR1 Mathiasen Motorsports Ligier JSP217, had light contact while lapping Frank Montecalvo in the No. 64 Scuderia Corsa Ferrari 488 GT3 while exiting Turn 17. Montecalvo flipped, impacting the outside barrier with the car coming to a stop on its roof. Saavedra tagged the tire barrier at the inside of the turn and was able to continue to the pits. The team replaced the front bodywork and Saavedra was able to continue.

“I had nowhere to go,” said Montecalvo, whose car was retired following the incident.

Polesitter Tristan Vautier led the opening 14 laps in the No. 90 Spirit of Daytona Cadillac DPi-V.R, with the lead cycling to Taylor following caution-flag pit stops.

Action began moments following the “waving of the green” for the St. Patrick’s Day event. Outside front-row starter Olivier Pla made a bid to pass Vautier for the lead entering Turn 1, but went wide to the right in the No. 2 Tequila Patron ESM Nissan Onroak DPi and slid onto the concrete run-off area. He managed to avoid the barrier, but pitted at the end of the lap. The team worked on the car for five laps on pit road, and then pushed the car behind the wall to work on a gearbox issue. The car was officially retired at the half-hour mark without completing a lap.

The opening lap also saw cut left-rear tires for defending GTLM race winner Antonio Garcia in the No. 3 Corvette Racing C7.R, and GTD pole winner Daniel Serra in the No. 51 Spirit of Racing Ferrari 488 GT3. Both cars continued after stops.

The No. 99 JDC-Miller Motorsports GAINSCO ORECA 07-Gibson took the green flag on pit road after a frantic bid by the team to have the car ready for the race. The car would not start when Stephen Simpson attempted to fire up the “Red Dragon” for morning warm-up. Since then, the crew went through “miles of wiring” to trace down the problem. The car was able to start, although the team reported that the car had no power steering or telemetry.

The team is being cheered on by 200 Miami-based GAINSCO employees, with the car running 12th on the lead lap at the end of the hour.