Despite discouragement over its showing at the season-opening Rolex 24 At Daytona, Florida-based Tequila Patron ESM is confident of its prospects for better success in this weekend’s Mobil 1 Twelve Hours of Sebring.

“Daytona was a huge disappointment,” conceded Extreme Speed Motorsports owner Scott Sharp (pictured above). “In the middle of the night we felt we were in great shape, running in second place and keeping pace with the leader. Our No. 22 car had some problems but they bounced back pretty strong, so we felt that both of our cars were in great contention. Then our problems were devastating to everybody. We worked so hard, and you hate to see the chance to win a race go away.” 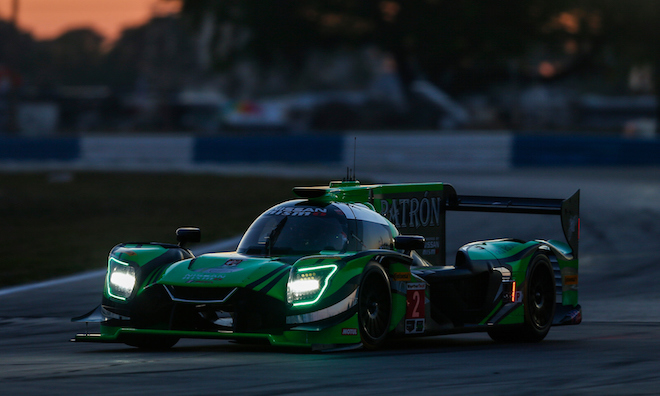 This weekend, Sharp will co-drive the No. 2 Nissan Onroak DPi with Ryan Dalziel and Olivier Pla. Pipo Derani, Johannes van Overbeek and Nicolas Lapierre share the No. 22 machine. Two years ago, Sharp, Derani, van Overbeek and Ed Brown were overall winners at Sebring.

“Since Daytona, the entire organization has been working very hard,” Sharp said. “Nissan and NISMO have been working on some of their problems, and we’ve been working with Xtrac to deal with the issue that put us out of the race, which was a main seal in the gearbox. And we’ve tested here twice.

“Racing, unfortunately, has lots of disappointments to it,” Sharp noted. “Everyone here has lots of experience, and they’ve dealt with both the highs and lots of lows. You’ve just got to pull your pants up and keep moving.”

The Sebring race has additional motivation for Sharp, a Connecticut native who lives in nearby Jupiter. The team is also based on Florida’s East Coast, in Riviera Beach.

“Obviously, we consider this our home track,” Sharp said. “We’re an hour and a half from here, and we come over here and testing a lot with these cars and our P3 cars. Any time we have an issue in testing, the guys jump in the truck and go right back to the shop to get what they need. A lot of people from West Palm Beach come here for the race, and some of the people on the team are actually from Sebring.”

In addition to winning the 2016 Sebring event, Sharp is a two-time winner of the Rolex 24. He won Daytona’s 1996 race with Wayne Taylor and Jim Pace, and doubled up in the Florida endurance classics 20 years later.

“This race is probably tougher [than Daytona],” Sharp admitted. “It beats the car up so badly. It’s a tough track to get a handle on setup-wise, and it’s a grueling track for a driver, fitness-wise. The straightaways look long, but you don’t get much of a break, and you’re pretty exhausted after a double stint here.

“I feel pretty good here for our team. We’ve tested well here, but at the same time it’s going to be mighty competitive up front. I’m expecting to see an eight- or 10-car train for the lead almost the whole race.”