FIA president Jean Todt says Formula 1 needs to agree on a direction for its engine regulations from 2020 onward by the end of this year if it wants to attract new manufacturers.

The current V6 turbo power unit regulations run until the end of 2020, with discussions ongoing about the next set of rules. An initial proposal from the FIA and F1 was met with resistance from the current engine manufacturers, but Todt says a solution needs to be found over the next nine months to allow both current and potential new manufacturers to prepare.

“I would say it’s a work in process,” Todt (pictured below) said of the next set of rules. “We are just starting the 2018 Formula 1 season and we are now also working on the 2021 regulations. Clearly – and it’s something I’ve instructed our people – I think it would be very unfair to destroy all of what has been done on the engine to start with a completely white piece of paper. 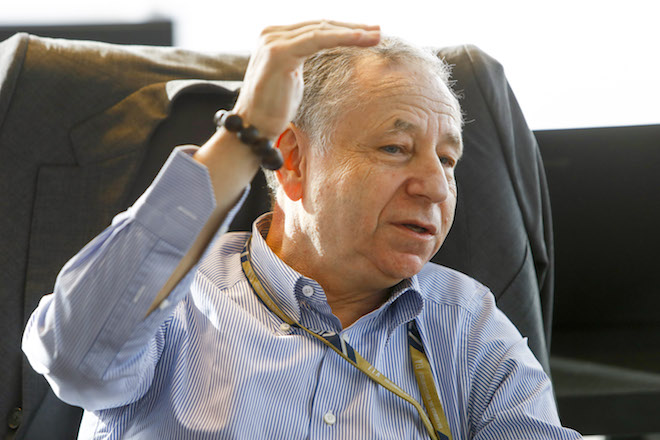 “So for me it is essential that we optimize what has been developed, what is known. We know that technology is progressing very much. Not only on complication but also on simplification, so the whole idea is to work on what are the engine rules now and make them better.

“Unfortunately, there is a very selective memory – a few months ago we all sat together and we all agreed unanimously on certain adaptations of the engine for the future. The parameters were on the global framework of the actual engine we should have a cheaper engine, more revs, no fuel consumption limitation – being able to go from the first lap to the last lap on full power – increase the fuel flow, improve the noise, hybrid, simpler and to encourage new entrants.

“So it would be unfair to say, ‘OK, let’s try to get some newcomers’ without respecting those who have been trusting us and who intend hopefully to stay. But on the other side I would be very happy to have some newcomers and for that we must have clear rules of the game and announce them as soon as we can because I know – and I’ve been talking with some potential new entrants – they are interested to come in but they want to know what the rules of the game are. I think it’s a fair request and we need to give that as soon as possible.”

Adding that “the soonest is the best” in terms of finalizing the regulations, when asked if he had been given a deadline that the interested parties would need to know by in order to commit to entering F1, Todt said the end of this year is as late as it can be decided.

“If you are talking about introducing new engine manufacturers to be ready by 2021, they must know what it will be by the end of the year. That leaves 2019 and 2020 to make the engine, which is a fair period.”