Honda’s management restructuring over the winter led to a change in the Japanese manufacturer’s power unit development approach at the start of its partnership with Toro Rosso.

At the same time as switching teams from McLaren to Toro Rosso, Honda also opted to make changes to the top of the F1 project’s management structure. Out went Yusuke Hasegawa – the former head of the F1 project – and new roles were created, with Toyoharu Tanabe becoming F1 technical director trackside and Yasuaki Asaki overseeing research and development at Sakura.

“Tanabe was in F1 during past eras of our challenge, and recently he was leading the IndyCar project, so naturally he has a lot of experience in trackside operations,” Yamamoto told the Honda Racing website.

“His style of management is to go inside of the engineering room and collect the information and make decisions, rather than waiting for the information to be reported to him outside. Therefore he is able to show his leadership in very close cooperation both with Toro Rosso and our engineers.

“Asaki is a leader who has led some suffering projects at Honda to huge success in the past. He can always make the right decisions in terms of priorities – working out what is good and removing what is bad.

“In Sakura already, he starting by lining up all the ongoing developments in one place, and then made a decision about which one to focus on, abandoning the others. As a result, now we are putting more resources into one project which enables the development to proceed quicker.” 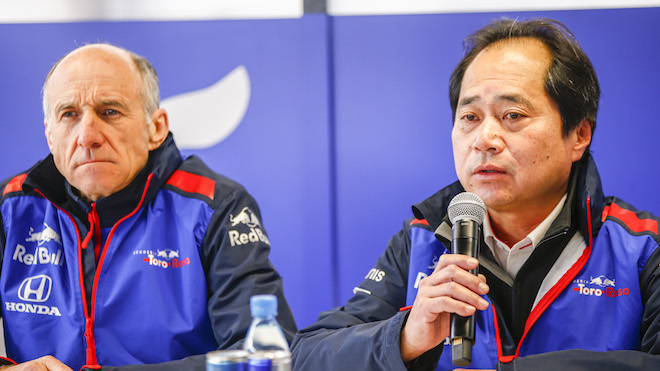 Tanabe (pictured at right, above, with Toro Rosso team principal Franz Tost) says he will be more directly involved with the engineers trackside compared to Hasegawa, who had a greater spread of responsibilities.

“I’m more hands-on at the circuit,” Tanabe said. “I think in order to improve the performance, the development team on the Sakura side need accurate and precise information from trackside. That’s a priority. So we supply them with the information, they can react quickly and in a proper way to identify priorities.

“Some of the areas in F1 are the same as a long time ago, but then the engine has changed to a power unit, so many areas have been changed recently. As I am just starting, I have started to learn when I am here.

“We also joined Toro Rosso this year, which is new to us. Not just to me, but to all of us. So nobody could tell me ‘this is the Toro Rosso way’ and we needed to find out every day how to manage and organize the trackside operation.”