Open-wheel racing legend and NBCSN TV commentator Paul Tracy will join the Trans Am Series presented by Pirelli at Road Atlanta for the Georgia Speedfest, March 29-31, driving the No.87 3-Dimensional Services Group Chevrolet Camaro (pictured below, image by Chris Clark) in the TA2 class.

The 49-year-old Tracy, the 2003 Champ Car champion, will drive the No.87 in place of team owner Doug Peterson, who opted to enter a showcase driver in his absence at Atlanta. The addition of Tracy will give the 3-Dimensional team a potent one-two punch alongside former IndyCar competitor Rafa Matos, a full-time member and championship competitor in the TA2 class.

“I’m pleased to have Paul pilot the No.87 for us,” said Peterson. “The TA2 class has continued to grow over the past few years and is, in my opinion, one of the most competitive classes in North America. Putting Paul in the car helps shine a light on the class, and Trans Am, while giving our Atlanta event yet another layer of excitement.” 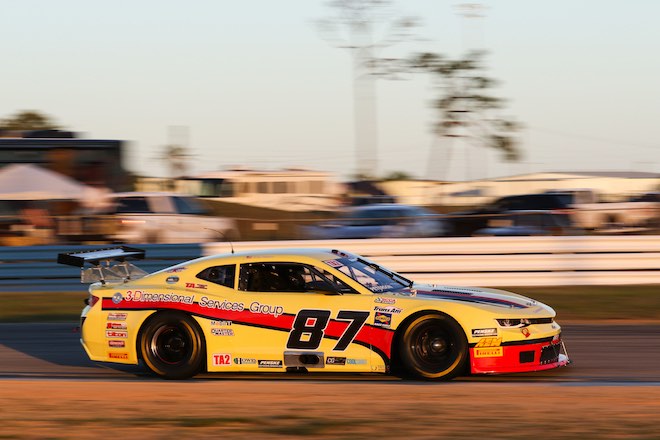 Despite racing experience that spans Can-Am, IndyCar and Champ Car, Grand-Am, NASCAR and more, the event will mark Tracy’s Trans Am debut.

“What a great opportunity to make a return to Road Atlanta after so many years and drive in Trans Am,” said Tracy. “My good friend Tommy Kendall has been pushing me to get more involved in sports car racing and I’m thrilled to be back in the seat. I look forward to giving the entire field a run for their money in the TA2 class and putting the No.87 Camaro on the podium.”

Tracy will compete in the TA2 Muscle Car Challenge, a 101.6-mile, 40-lap competition on Saturday, March 31 at 11:10 a.m. ET, racing against a field including Matos, Marc Miller, Tony Buffomante, Shane Lewis and more.